When Shelina Permalloo wowed notoriously critical Masterchef judges Gregg Wallace and John Torode with her mango millefeuille and coconut rum samosas, food enthusiasts up and down the country put down their fish and chips and reached for the spice rack. The 29-year-old chef from Southampton won the Masterchef crown earlier in 2012 with dishes inspired by her Mauritian heritage. Her victory prompted the establishment of a new wave of Mauritian restaurants and cafes that are making their mark on the UK’s eclectic culinary scene.

However it seems to be street food in particular that is taking the country by storm, and we’re not talking about greasy chips from a suspect burger van! The British public are getting passionate about freshly made, high quality food that they can munch on the go – and recipes from the sparkling shores of Mauritius are the next big thing. This week Kenwood Travel have been speaking to passionate culinarian turned street food entrepreneur, Jason Horeesorun, to find out why Mauritian flavours are so à la mode and where we should go to sample the best that the island has to offer.

Lancashire born Jason has always had a passion for quality food. Growing up in Britain in the 1980’s, Jason’s Mauritian parents made sure his palate was saturated from an early age with the deliciously sweet and often fiery flavours of cuisine from Mauritius. The love affair with the island’s aromas never left him and he set up his company Mauritian Street Food 18 months ago. The business is thriving thanks to what Jason describes as the UK’s appetite for “fusion food”.

Talking about his motivation for entering this highly competitive market, it is clear that Jason’s family have been incredibly influential: “My Mother Jamilla has been my biggest inspiration, when I was growing up she made the most amazing food – out of nothing! I lived in London for a long time and ate out a lot but never once ate anything Mauritian”.

There was a gap in the market for Mauritian street food but what drove Jason was a desire to introduce other Brits to the exquisite tastes he had been able to enjoy at home: “I really wanted to share the amazing flavours of Mauritian fusion food. I had many dinner parties where friends would say how delicious it is and also very different to what they have eaten before”.

Since establishing Mauritian Street Food, Jason has toured food festivals and music events all over the UK and wowed the crowds with his fresh food –  infused with dashes of spice, a pinch of colour and more than a hint of passion. 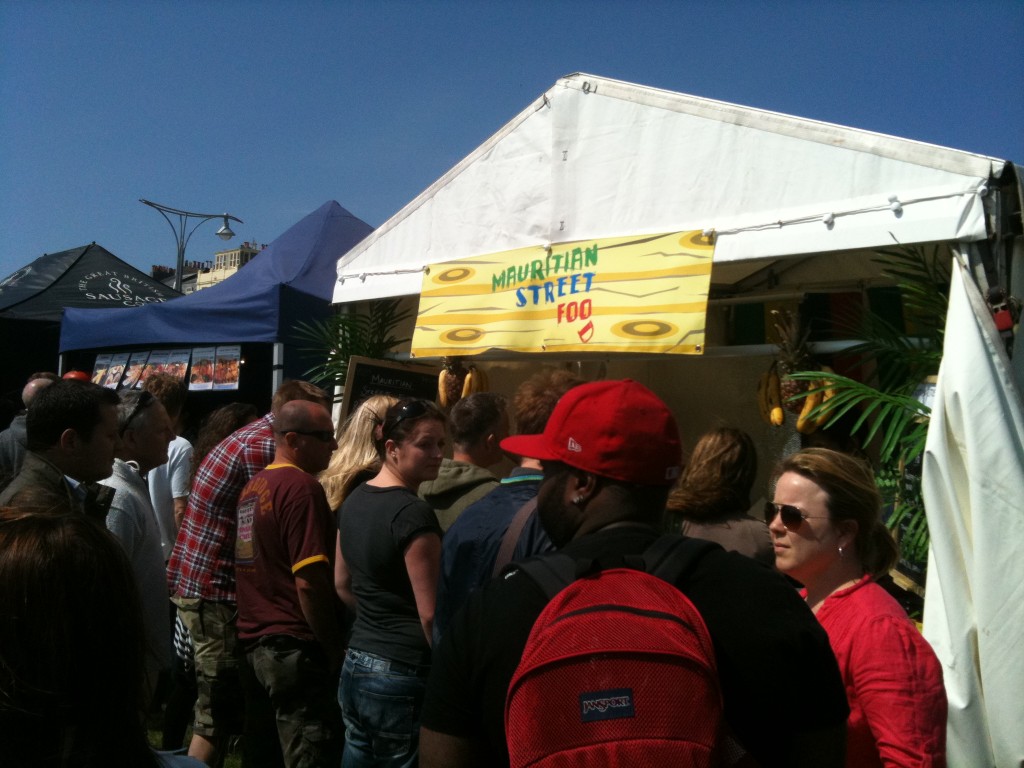 Both Shelina and Jason draw inspiration from the heart of the island itself, the pearl of the Indian Ocean. Food and drink in Mauritius are as diverse as the island’s history, reflecting flavours inspired by its French, African, British, Indian and Chinese population. Jason, who is fluent in the native Creole language, explains what it is about Mauritian food that is so special: “Mauritius is such a melting pot of different cultures from around the world and this is reflected in the cuisine. I also think that it is the fresh ingredients and the clever use of spices that really makes Mauritian food so appealing”.

Food is also a great form of escapism and the frequent gloomy weather in Britain means many a gourmand will use their taste buds to transport themselves to somewhere more exotic, as Jason remarks: “The British people are so wonderful and want to try something new – and with the ‘paradise’ connotations that Mauritius has, people want to try a bit of food heaven!”

Though he spends his weekends supplying the British public with mouth-watering dishes such as Gatteaux Piment (Chilli Cakes) and Dipain Frire (Chick Pea Battered bread), Jason has been visiting Mauritius regularly since childhood and relishes his holidays there as an opportunity to relax, have fun and catch up with friends and family. The budding chef told us what makes his Mauritius holidays so special: “I always stay in Flic en Flac on the west coast of the island, it really is beautiful with the most spectacular views. The sea really is like you see in brochures and snorkelling and scuba diving is amazing, the golf courses are ridiculously beautiful too!” Jason even divulged his secret travel tip: “Take a boat out to Ile aux Cerf, a small island off the coast of Mauritius – it’s heavenly”.

Of course no discussion about Mauritius would be complete without mentioning the island’s legendary epicurean delights. There are a myriad of exquisite restaurants to visit but the most delicious dishes are found on the street, as Jason explains: “When I visit Mauritius it’s all about the street food. Vendors are dotted around the island, selling all kinds of gajak (snacks). I always go to Rose hill for my Gatteaux Piment and a little roadside Cafe called Dewa where you can buy rotis and Dhall Puri – my parents have been going for years”.

It seems a culinary tour of Mauritius is all about authentic, fresh ingredients prepared by passionate islanders who are bold with their cooking (try fresh pineapple seasoned with chilli). When choosing your lunchtime meal in Mauritius remember Jason’s advice: “always pick the street food vendor with the longest queue as they will have the best reputation!”

Mauritian Food Heating Up the UK

If you’ve just returned from a memorable holiday in Mauritius you are probably pining for the island’s flavourful fare.  Thankfully, there are plenty of newly opened restaurants serving food inspired by Mauritius that you can try. Visit Shelina Permalloo’s twitter site – with “I Love Mauritian Food” emblazoned across the web page – and keep afloat of plans to open her own restaurant serving Mauritian cuisine.

Of course the best place to get your authentic foodie fix is at the colourful Mauritian Street Food stall where you will see Jason in his element, serving quality produce with an unforgettable flavour. Jason is excited for what the future holds for the business but won’t be changing his down-to-earth approach to Mauritian cooking in a hurry: “for now I am enjoying sharing a little taste of what the island has to offer, meeting the great British public and having fun”.

Mauritian Street Food will be at the following events this summer:

For more information or to book Mauritian Street Food for a private function contact Jason at info@mauritianstreetfood.co.uk

Book your dream holiday in Mauritius  with Kenwood Travel and experience the gourmet pleasures of the island for yourself.

For more on Mauritius, check out :