Florida is renowned for its beautiful beaches, seemingly endless days of sunshine and its epic theme parks. Universal’s Islands of Adventure in Orlando has continued to thrill visitors on holiday in Florida with its jaw-dropping rides and other-worldly attractions. Whether you’re visiting the state with family or as a couple, this amazing theme park has something to offer everyone. To help you plan your trip, this guide to Universal’s Islands of Adventure highlights some of the park’s coolest hidden features.

Marvel Super Hero Island is home to some of the most popular rides in the park. The Amazing Adventures of Spider-Man offers thrill seekers a high-flying virtual reality ride in which the villains of the Sinister Syndicate steal the Statue of Liberty, and it’s up to Spider-Man to save the day once again. Elsewhere, The Incredible Hulk Coaster draws in the crowds. The rollercoaster leads you through a high-security research compound before you’re “blasted with gamma radiation” and propelled out onto the tracks. This adrenaline-pumping ride has enough twists and turns to challenge even the most avid coaster fans. If this isn’t enough, the aptly named Doctor Doom’s Fearfall is guaranteed to get your heart racing. The ride sees visitors strapped into a seat and blasted 185 feet into the air before being dropped in a terrifying freefall.

Whether you’re here for the thrills or if you’re just a huge Marvel fan, this island is perfect for all ages. Throughout the park, heroes and villains wander around for photo opportunities and there are tonnes of themed dining experiences to enjoy.

Look out for: The giant speakers – these communication ports feature special messages for the superheroes and villains in the area. Simply press the button to hear the latest news. 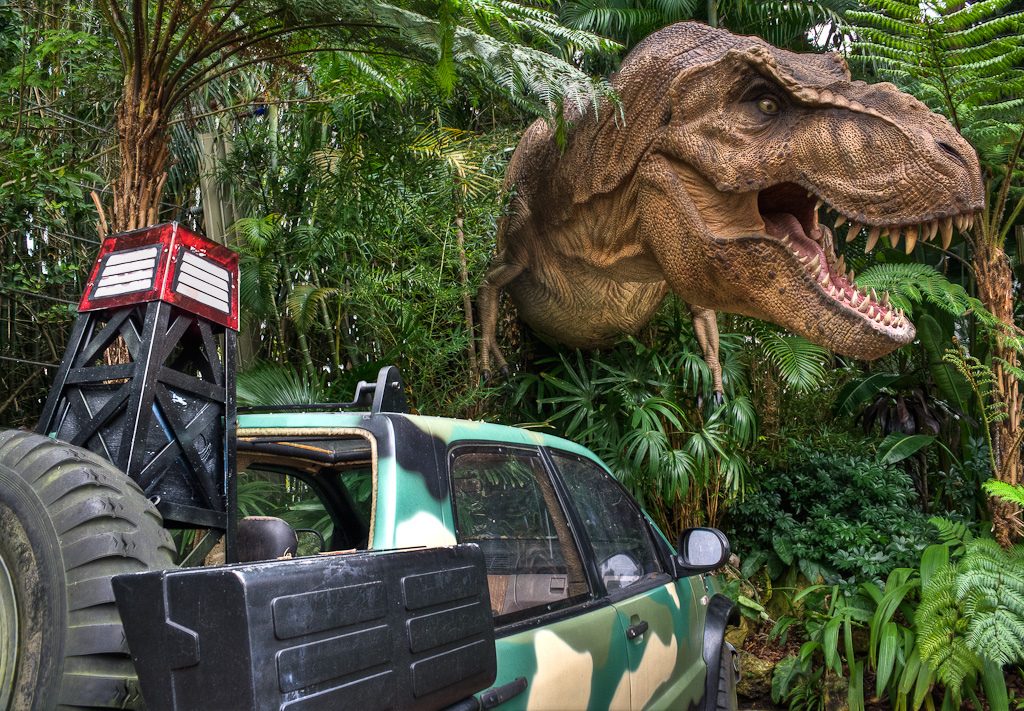 Jurassic Park fans will love roaming through this island. Recreating the story seen in Spielberg’s hit films, the park offers thrilling rides for everyone as well as plenty of hidden details for super fans. If you dare, set off on the Jurassic Park River Adventure, where you’ll glide along in a raft past dinosaurs on the banks, before being thrown into the park’s restricted area. Here, you’ll face the mighty T. rex. For those who know every line of the films, the Jurassic Park Discovery Centre is a must-see. Unearth the planet’s prehistoric past at this interactive centre. Kids will love testing their DNA to see what kind of dinosaur they would be and watching baby Velociraptors hatch in the nursery.

If you’re hungry, this island won’t let you down. Head to the Thunder Falls Terrace to dine on chicken and turkey legs and watch riders getting soaked at the grand finale of Jurassic Park River Adventure. If you sit close enough you might actually get a cooling spray of water! 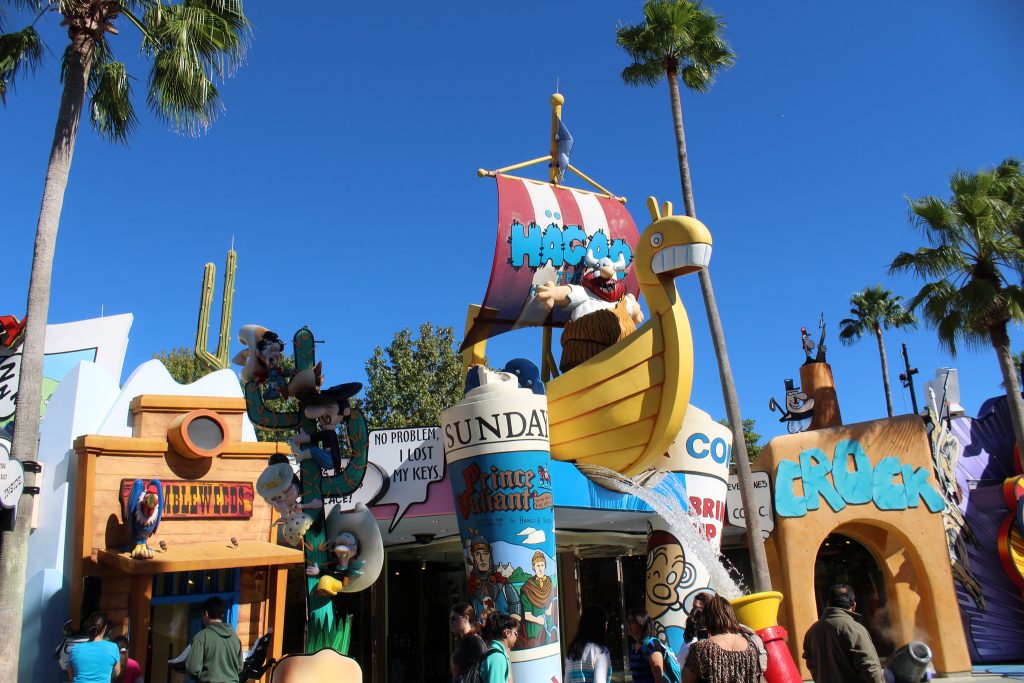 If it’s a scorching hot day when you visit Universal’s Islands of Adventure, head to Toon Lagoon. This island has three water-based attractions including Popeye and Bluto’s Bilge-Rat Barges, Me Ship, The Olive and Dudley Do-Right’s Ripsaw Falls which are fun for the whole family. Toon Lagoon allows guests to step into the animated worlds of some of the most popular comic characters. Needless to say, it’ll be a guaranteed hit with the kids. But that’s not to say there’s nothing here for adults.

The Comic Strip Café offers guests the chance to read up on classic comics including Hagar the Horrible, Beetle Bailey and Broom-Hilda, all the while tucking into delicious fried chicken, hot dogs and other theme park favourites. For more nostalgic dining options, check out Blondie’s which serves tasty deli sandwiches, subs and loaded hot dogs.

Look out for: A chance to spray water guns at unsuspecting visitors! The park is full of water guns which you can spray at people on various rides. The On Me Ship, The Olive, attraction has water guns that are free to use, so go wild! 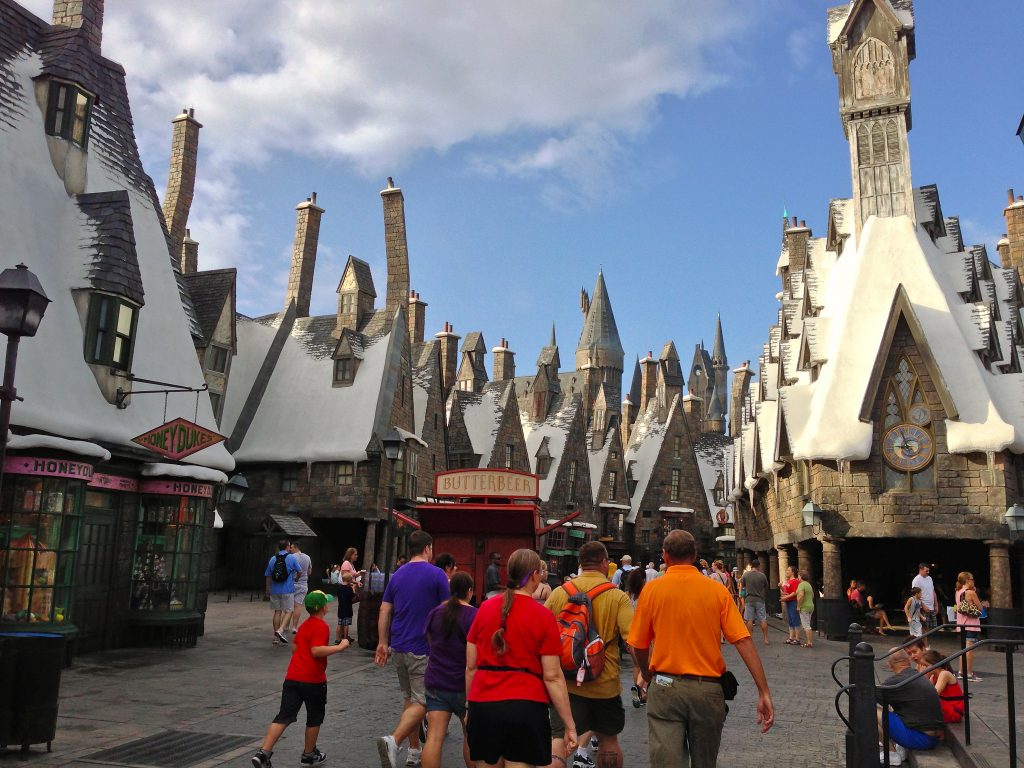 The Harry Potter franchise remains one of the most popular in the world. So it’s little wonder that this particular attraction draws such big crowds. The Wizarding World of Harry Potter is actually split between Universal Orlando and Universal’s Islands of Adventure. Here, you’ll get the chance to roam through the wizarding village of Hogsmeade, where you can dine at the Three Broomsticks (and wash it down with a glass of Pumpkin Fizz or Hog’s Head Brew), shop for sweets at Honeydukes and even stop by Hagrid’s hut on the Flight of the Hippogriff ride.

Claudia Laroye of The Travelling Mom and contributor at Travel Mamas, told us about her magical experience at Islands and Hogsmeade: “Universal’s Islands of Adventure is a fabulous, family-friendly theme park that meets the needs of fun-seekers of any age. For Harry Potter fans, wandering the streets of Hogsmeade, dining at the Three Broomsticks, or riding the Forbidden Journey ride is an unforgettable fantasy come to life.

“As avid Harry Potter fans we couldn’t get enough of wandering through Honeydukes, or sipping the two varieties of on-tap Butter Beer (frozen or chilled). Finding our special wand at Ollivanders was thrilling, as was posting cards, complete with a special Hogsmeade stamp from the Owl Post. The rides, especially Forbidden Journey, are also quite fantastic.”

Look out for: The shrunken heads used in Harry Potter and the Prisoner of Azkaban in the Hog’s Head Pub. They’re on either side of the animatronic hog’s head. Also, when you’re queuing for the Forbidden Journey ride, listen out for the teacher lecturing behind the Potions classroom door. 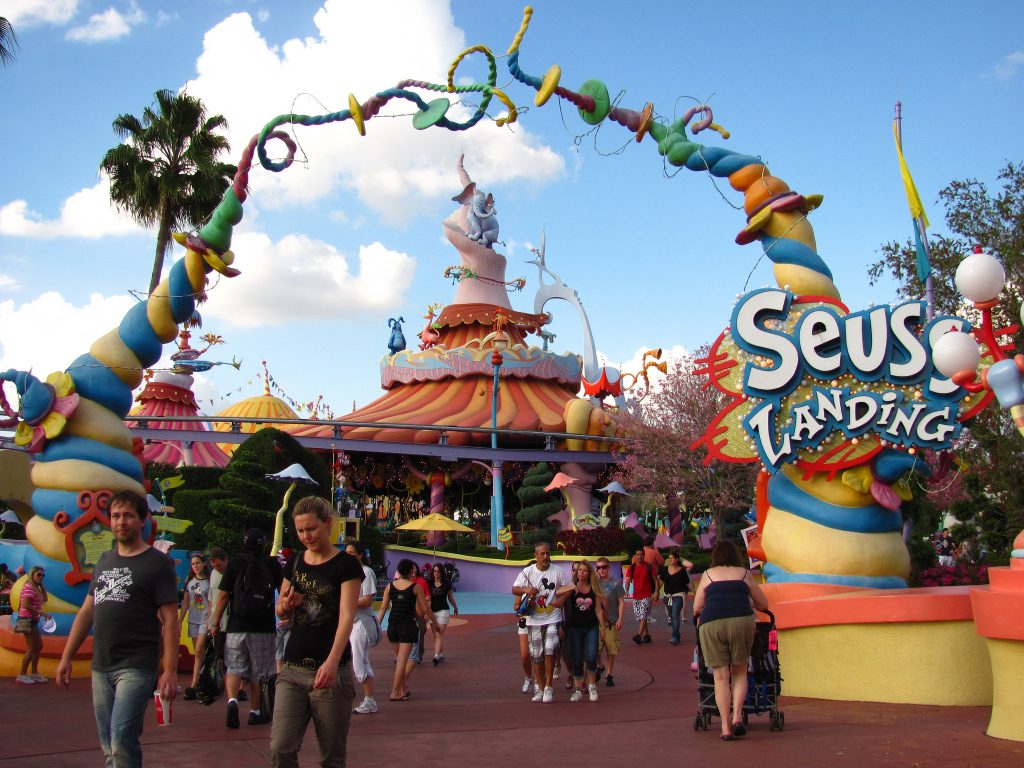 Step into the weird and wonderful world of Dr Seuss at this fantastical island. Seuss Landing is an eccentric amalgamation of Dr Seuss’ best-loved stories including The Cat in the Hat, One Fish, Two Fish, Red Fish, Blue Fish and If I Ran the Zoo. It goes without saying that this part of the park is perfect for kids. Families will love exploring the island and discovering lots of hidden features related to these popular books.

The rides in Seuss Landing are all great for kids. The Cat in the Hat ride sees visitors whisked through the pages of a book, while The High in the Sky Seuss Trolley Train Ride raises guests up 20 feet, travelling through book-based scenes and giving a spectacular view over the park. Take a ride on the surreal Caro-Seuss-el or to unwind, visit the If I Ran the Zoo interactive play area. If you’re planning a holiday to Florida over Christmas, be sure to visit Seuss Landing as it’s transformed into Whoville for a Grinchmas celebration!

Look out for: The footprints outside Snookers and Snookers Sweet Candy Cookers to hear a message from a Sneetch. 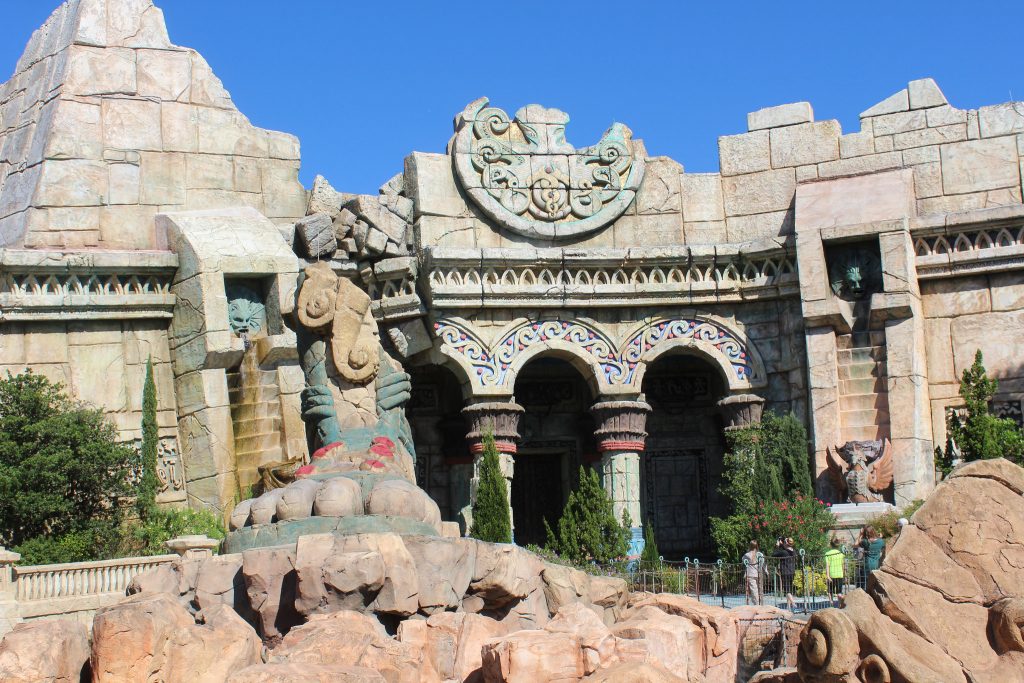 Discover a world of ancient myths and legends in The Lost Continent. Brave visitors can step into a world of Greek gods and fearsome beasts to ride some of the most exciting rides in Universal’s Islands of Adventure. Leave the familiarities of Florida behind and throw yourself into Poseidon’s Fury. With the help of an archaeologist guide you’ll explore the ruins of the Temple of Poseidon before being caught up in a frightful battle between Poseidon and Lord Darkenon. Families will love The Eighth Voyage of Sindbad which sees Sindbad and his sidekick Kabob perform death-defying stunts to rescue Princess Amoura from the clutches of an evil witch, Miseria.

When it comes to dining in The Lost Continent, Mythos Restaurant is the place to go. Regularly praised by fan websites as being the world’s best theme park restaurant, the interior of Mythos is truly spectacular. The menu offers a mix of delicious Asian and Mediterranean dishes. 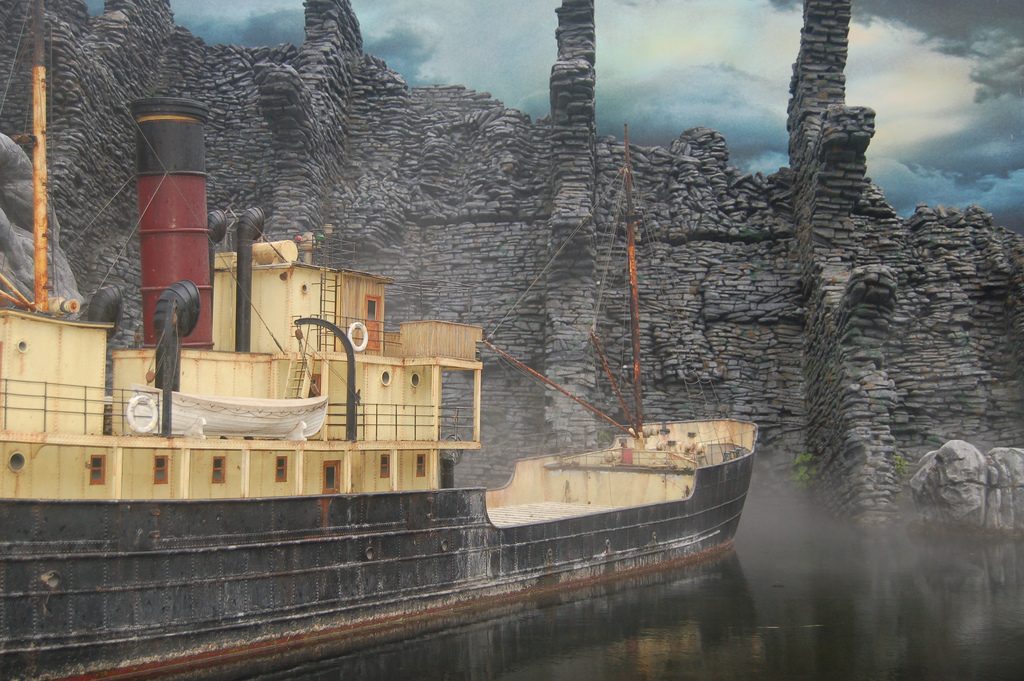 King Kong stars in his own mega-attraction in Skull Island. As the only ride in the island, Skull Island: Reign of Kong is a truly epic feature at the park. Having only officially opened in July 2016, there has been plenty of anticipation for this terrifying attraction. Guests enter under an intimidating sculpture of King Kong and are led to the dark heart of the jungle, surrounded by prehistoric predators, by a brave expedition guide. Prepare for a thrilling experience as your vehicle is attacked from all sides. Will King Kong save the day?

Look out for: The amazing animatronics. As this is the only ride in Skull Island, you’ll note that the attention to detail is remarkable.

Top tips for your visit

If this is your first time visiting Universal’s Islands of Adventure, you may find these tips from Claudia at The Travelling Mom helpful: “Be there when the gates open. It always pays off to begin your day early, and then hightail it to the ride you want to experience the most.

“If you plan to visit during very busy periods (Christmas holidays or spring break), consider purchasing the Express Pass to bypass lines and save time. Waits of 1.5 hours for the Forbidden Journey ride are not uncommon, and if time is money, then the Express Pass may pay for itself. Depending on your level of Harry Potter fandom, or love of roller coasters, you may want a multi-day pass. Figure out how many visit days you’ll want to pay for, and consider purchasing tickets ahead of time.

“If budget allows, consider on-site accommodation to access specific perks unavailable to those staying off-property, such as Early Park Admission. Finally, make lunch reservations at Mythos restaurant. The food is excellent (above the usual theme park fare), and as it’s a very busy place, you won’t have to wait for a table if you’ve reserved ahead of time.”