What with its endless white beaches and luscious greenery, the little island of St Barts is rife with indigenous wildlife. But of late a different species has been roaming these pristine shores…

Agile, often herbivorous, and remarkably well adapted to changing habitats, the ‘celebrity’ is a species that comes in a variety of shapes and sizes. From the pack leaders who like to parade their authority at every opportunity, to the somewhat nomadic varieties who avoid getting their feathers ruffled by interaction with non-celebs at all costs, there is one thing you can count on to be common amongst them all. Nearly every member of the Homo Celebritas family migrates to sunnier climes come winter. But with such a wealth of winter sun destinations in the Caribbean, what has made them flock to St Barts?

Us normal beings can learn a lot from nature – the first warning of a volcanic eruption is in the unusual behaviour of the wildlife that live there, for example – and what we can learn from this recent influx of celebrity, is that there is something truly special about St Barts.

This tiny eight square mile island has some of the most beautiful beaches in the entire Caribbean, with endless white sands and crystalline waters, but perhaps what is most attractive to the celebrity here is the complete lack of interference in their day to day shenanigans; here in St Barts the locals maintain a merely mild interest, that verges on an almost laissez-faire attitude. Celebrities have been known to wander the white sands unhindered, or take a welcome hike through the verdant landscapes without so much as an autograph request. This is a place where privacy and personal space is valued.

But that is not all that attracts celebrities to this incredible island. Here there is an abundance of places suitable for a new abode, and after a day foraging in the foliage there is no better way to relax than at one of St Barts’ numerous luxury hotels. With this celebrity migration becoming somewhat of a regular occurrence certain establishments have proved themselves as favourites; Eden Rock hotel in particular is a big hit amongst the upper echelons, hosting guests such as Robert De Niro, Tom Hanks, and Mick Jagger. 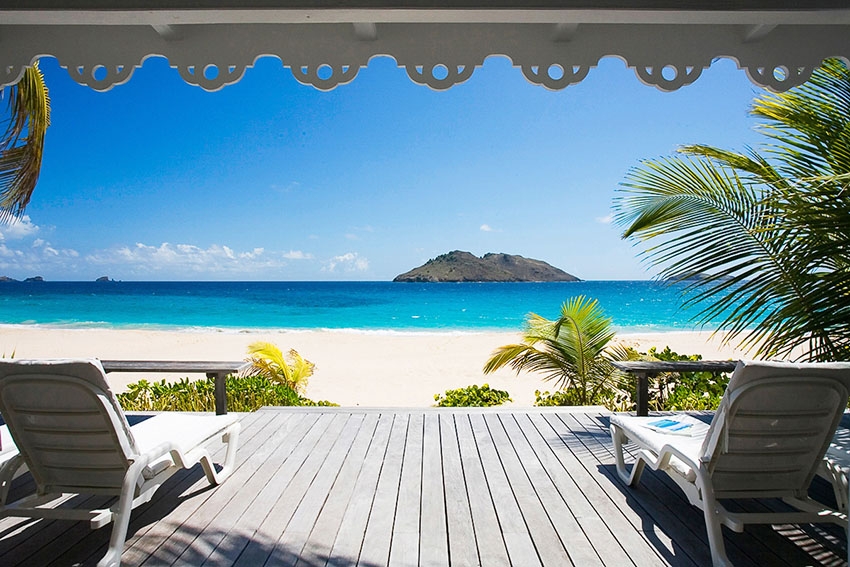 Celebrities, it seems, know how to choose a holiday.

If nothing else, Sir David Attenborough has certainly taught us that habitats and their inhabitants are in constant flux, with unspoken transactions taking place all the time. As the British peppered moth changed its colour with the blackening of polluted skies, so did carnivorous plants adapt to better feast upon the flies it helps make a home for – and St Barts is no exception to this pattern. With such stylish new inhabitants, St Barts has developed an equally stylish shopping scene, with designers such as Louis Vuitton and Nicole Farhi adorning the shop windows. Not to mention of course that this is all duty free – a definite temptation to any shopaholic.

The curious thing about the celebrity is that, despite a general reluctance to spend too much time amongst non-celebrity species, most individuals will be accompanied by one or two Normal Homo Sapiens on a daily basis in the form of ‘bodyguards’. The harsh truth is that any species that is in the minority is usually under threat from another species, and as such celebrities nowadays have taken to having security accompany them wherever they go. But in St Barts this is not a problem – this island is so safe that locals and celebs alike happily leave their cars and homes unlocked. Crime just simply isn’t a part of the culture here.

One classic distinction between the Homo Celebritas and the average Homo Sapien is the former’s penchant for extravagant parties. Here is where we must acknowledge that secluded luxury and showy shindigs are not mutually exclusive traits, as St Barts seamlessly manages to weld the two. Celebrity-watchers here can observe this fascinating mammal in all sorts of states of lavish disarray, with some of the Caribbean’s most opulent bars playing host to their excessive revelry. But, almost unbelievably, this is not a place for segregation, and whilst the celebrities may be bathing in a metaphorical sea of champagne normal visitors to the island are welcome to frolic alongside their wealthier counterparts.

There is no doubt that the celebrity is a highly unusual species that cannot escape our curious scrutiny; to us, their way of life is alien, their actions often indecipherable, and their values at times entirely incomprehensible. But, despite this, one cannot admit that celebs might have it right in one area; St Barts is certainly a destination to add to our holiday hit-list. If an elitist escape is what you are after then make like the Glitterati and let Kenwood Travel whisk you away on the holiday of your dreams.