Dubai are at it again. First they decided to rebuild the world by casually knocking out a bunch of islands from scratch, and then chucking them into a lagoon in the shape of planet earth. Not content with that, they followed up by erecting the world’s tallest tower, the unnecessarily soaring Burj Khalifa. And yet still not satisfied, these blue-sky thinkers have been busy dreaming up yet more schemes to fritter away their wealth. This time blue-sky thinking is more like blue-sea thinking; they’re cooking up a deluxe underwater luxury playpen for the rich and richer.

Plans for this underwater hotel feature rooms 10m below the waves that double as subaqua viewing galleries. There’s also going to be an above water section complete with restaurant, spa, heliport and a lobby inside a giant swimming pool. Next to the submarine accommodation is an underwater dive centre, next to that a well-stocked bar – I know the place sounds excessive and all, but those are two things that probably shouldn’t go together.  All well and good you might think, if they want to fritter away, let them fritter away.

Actually it’s maybe not so much a case of frittering away their wealth; I mean they’ve got to have somewhere to put it, you can’t just stuff it under your pillow can you? Without reinvesting it, your dosh depreciates, hence money breeds money, and more money, and you can use that to leverage more money, and what do you get? Really, really big towers and super show-off underwater hotels, straight-out of a Bond villain’s wackiest and most decadent megalomaniac fantasies. With the decline in oil revenues and traditional ‘productive’ industries in the U.A.E., Dubai bought into the dream that real estate, leveraged with credit, was now the best way to combat captial collapse and stem, nay reverse, the tide of a declining rate of profit. Dubai was seen as a trading hub for not only the U.A.E. but also a bridge between oil rich Iran and a politically hostile West. A port city still, but a port for financial vehicles. 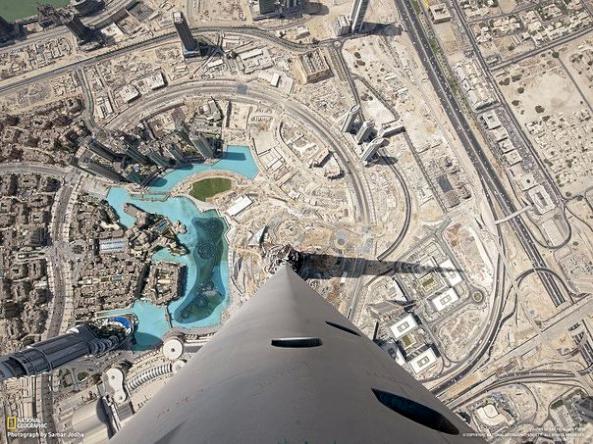 View from the top of Burj Khalifa

Burj Khalifa stands proud at 829.84 m – that’s nearly 3 times the size of Western Europe’s tallest building, London’s Shard, which only packs a miserly 309.6 metres in comparison. What were they thinking? Positively minuscule, you’d probably hardly have room to swing a cat in such a poky mega-skyscraper. It was the Americans who started this craze for the most brash of architectural styles, and the skyscraper became not only a very prominent extension of architects and C.E.O.’s egos (amongst other things perhaps…) but also an iconic part of the branding – but not just of the occupants, also of the districts and the cities in which these turrets stood.

Following the moderate success of the skyscraper in the early 20th century, by the middle of that century the trend moved to building outward instead of upward, but come the 1980’s,  when those bossing the economies in the industrialised nations got worried about falling profit rates and faltering growth, they decided they could outsource most of their manufacturing to the cheap labour of the developing world. The result? Many cities in the advanced industrialised world became less about production and more about finance, trade and consumption. Deregulation meant that capital went mobile. What mattered now was attracting the benevolent grace of ‘inward investment’ hence the rise of the ‘special economic zone’. Here tax and planning regulations were relaxed or handed over to quasi-governmental-private-investor-combos to develop for big bucks. The result, a breezy attitude to regulation, attractive bits of real estate and the desire to draw in still further investment. Real estate and credit-backed consumption were seen as the panacea for the crises and contradictions of the 1970s. All of which lead inexorably to the rise and rise (and rise) of mega towers and other iconic architecture. 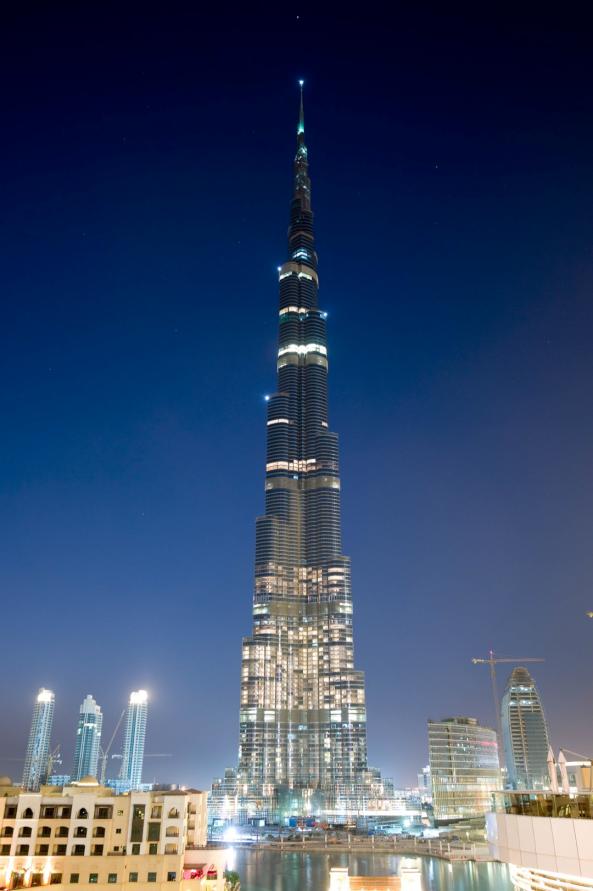 Dubai, well Dubai is no London, no New York or Frankfurt, Dubai is a bit different, yet they too have been attempting to turn to finance, and to hedge their bets somewhat, as far as inward investment goes, innovating new governmental technologies in the field of the ‘special economic zone’. So-called ‘freezones’ have been established for healthcare, biotechnology, gold and diamonds, and media. So although built on oil money, Dubai too has been keen to move into other industries, notably financial services and tourism. In this case, real estate is a seen as a good sink for loose capital, and as far as both the shifting sands of  ‘confidence’ – which finance and property prices are built upon – and attracting plenty of well-paying tourists goes, looking pretty helps things along nicely.

Whereas in many Western cities the vague, if much vaunted notion of the ‘creative city’ was built upon the cynical fostering and subsequent subsumption of ‘organic’ creative ‘communities’, Dubai being a largely centrally-planned metropolis, both architecturally and socially, found it hard to recreate the conditions for such a community to flourish. The mostly informally-employed and ‘underground’ networks of creative individuals and projects required for the generation of that elusive ‘creative buzz’ have certain prosaic requirements. They need such practicalities as cheap rents, cheap workspaces, cheap communications infrastructure, a personal and emotional investment in a district or city and a related lively and accessible creative life in that city; one built upon access and a certain level of what is often not directly profitable activity.

Dubai with its literally soaring real estate, strict planning controls and transient, largely affluent population has proved less successful at pursuing this ‘grassroots’ model. Generally they’ve opted to go the other way – into the large-scale show of opulence and excess – as a giant advertising hoarding for the possibilities of the imagination, when bolted to a booming bank account. 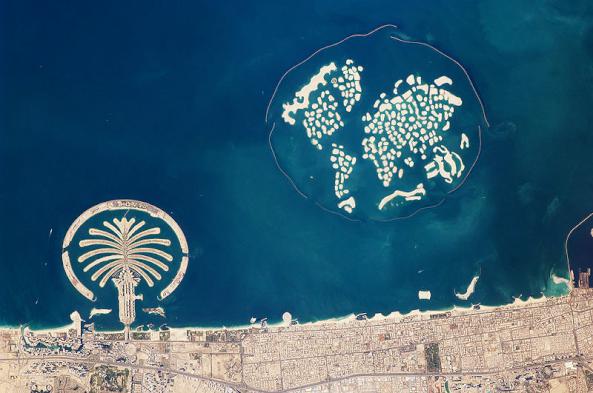 The World Dubai, and The Palm Dubai – artificial archipelagos

The usual explanation, that they also build this stuff just because they can, doesn’t really cut it. Yet with a deliberate policy of limiting the development of a domestic labour force as such, with the result that most low-paid jobs are contracted in, Dubai was never going to be about productive industry in the traditional sense. It was always going to be about putting on a show. It’s a playground for the rich, and a spectacle for the tourist gaze, but to be that it has to get them there. Yet why would the emergent class of global super-rich want or need all of this? Could there be another, more left-field explanation for the emirate’s eager display of abundance?

One time Surrealist and generally out-there French intellectual George Bataille, when not writing about sociology, the occult, art or eroticism, had a neat economic theory of abundance.

Whilst it might seem a little wacky in a time of so-called austerity, according to Bataille’s theory there is always a non-reclaimable, excessive part of any economy which he labels ‘the accused share’. This excess has to be spent in gaudy luxury, sumptuous indulgence and non-productive spectacles or monuments… either that or it ends up in a catastrophic splurge, which for George was often war, or ruinous sacrifice… property bubbles perhaps? Perhaps building huge playgrounds in the middle of the dessert could fit into one or other of these categories. Bataille reckons that expansion is always coming up against limits, the excess that can’t be ploughed productively back becoming luxury – this is the accused share. The form it takes speaks about the type of society it emerges from. Well Dubai is built upon an abundance of sorts, and whilst it might be argued to be only an abundance of finance, a spectacular abundance always at risk of crumbling – as the debt crisis of 2009 showed – it is an abundance nevertheless.

Glitzy spectacles built on a foundation of ‘black gold’, in which even the lip-service formerly paid to such apparently anachronistic conscience-salving as ‘trickle-down’ has been abandoned – or rather trickle down is now considered more as the down-payment on finance – makes one think maybe Bataille was right. Still if you get your hands on a slice of the ‘accursed share’ I doubt somehow you’ll be cursing your lot, it looks like rather a lot of fun if you can get it.

To experience the extravagance of Dubai first-hand book a luxury holiday to Dubai with Kenwood Travel.