As the third largest expanse of sea on planet earth, the Indian Ocean understandably offers an array of excellent fishing locations as well as a veritable smorgasbord of species to attempt to catch. There are also a lot of rare and endangered fish along the coastal shores of the ocean including dugong, seals, turtles, and whales as well as some truly stunning after-dark angling options. Check out all that fishing in the Indian Ocean has to offer in our handy guide below or, better yet, visit the giant water-feature for yourself.

The beautiful islands of the Seychelles offer a fabulously fantastic feast of fishing. Like many of the Indian Ocean islands, the Seychelles sit snugly in relative isolation: some 1,000 miles away from the African coast. The islands are scattered over 150,000 square miles and, being a series of relatively untainted little atolls, are full of flora and fauna that can’t be found anywhere else in the world. And this extends to its marine life too. Some of these fabulous fishies include striped bonito, bonefish, giant guitarfish and the excellently named moustache grouper.

The Seychelles has also become the epicentre of fly fishing in the region while its big-game fishing is pretty much second to none. In fact, a 75kg dogtooth tuna was recently caught at a 50 metre drop-off just 15 minutes from Denis Private Island, as well as a group of king fish caught during big game fishing just metres from the island. 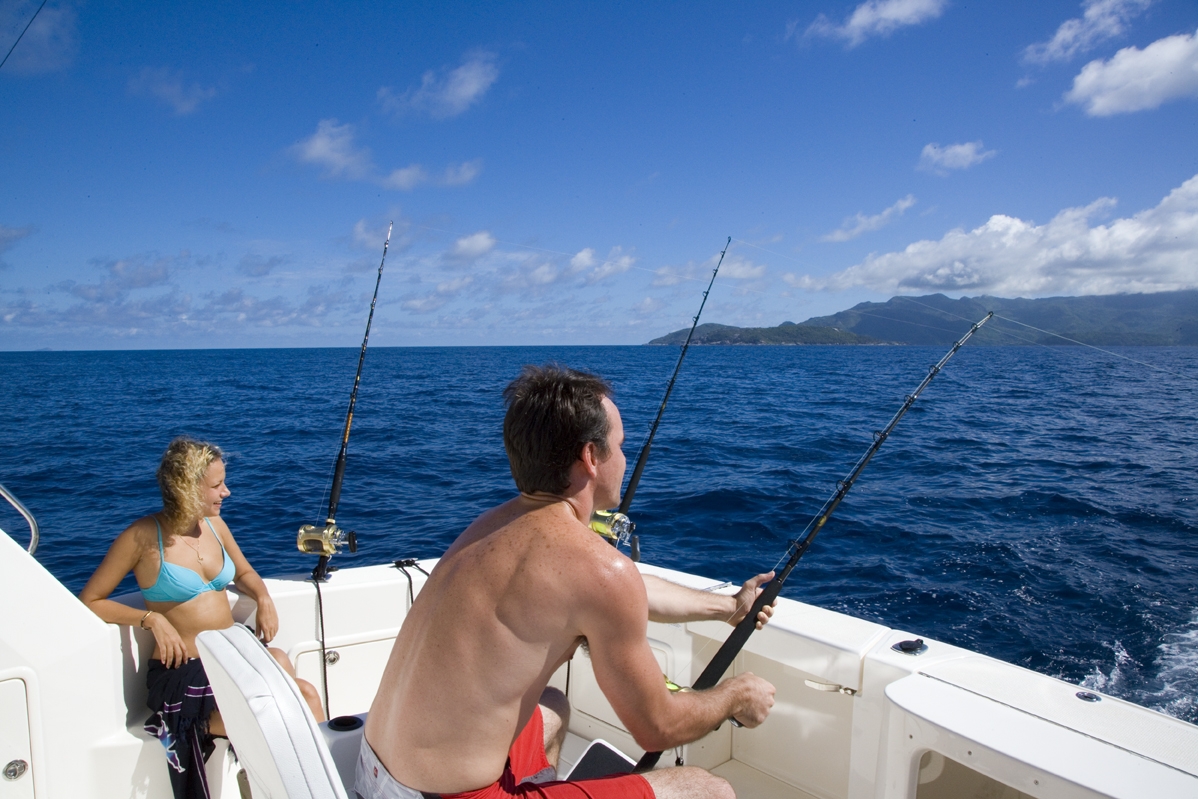 Much like its Indian Ocean cousin, the island of Mauritius has all kinds of fishing-related possibilities. One of the finest pieces of fillet you can find off the coast of Mauritius is the blue marlin. This rare aquatic creature can get as large as 2,000 lbs and is something of a prized catch for any angler. The Mauritian coast also holds a few fishing records involving both the blue marlin and quite a few other sea dwelling life forms. These include the record mako shark catch at 1,115lbs, a blue shark; weighing in at 400lbs and the oddly named becune weighing a hefty 125lbs.  Both the Seychelles and Mauritius are home to a smaller and niftier type of catch known as the sailfish, which is apparently the fastest recorded fish in the world and is also highly prized for its fabulous high-jumps. These frisky fish reach speeds of up to 68 mph.

Another suitably secluded Indian Ocean destination is the Maldives – sitting about 250 miles south-west of India. Fishing in the Maldives is the islands’ second main industry or, as its former president describes it: “the lifeblood of our nation… it remains an integral part of our existence. Fishing, and our country and its people, are one and shall remain inseparable forever.”  As it is pretty important to their economy to maintain a high level of fish in and around the archipelago, fishing from the beach with a rod is illegal so you’ll probably need to head out on organised trips with locals to get your angling fill. Once you do get out into the open ocean the world is your fish store.  Massive schools of tuna fish, a variety of sharks, high-jumping sailfish and the famous skipjack – a Maldivian delicacy which is the main export of the country – can all be found beneath the tranquil cerulean waters. Night fishing in the Maldives is a special treat too. Snappers, barracuda, squirrel fish and schools of other species emerge from the depths after dark.