Holidays to Oman have become particularly popular of late, and Kenwood Travel’s Matt finds out exactly why.

“Obviously the hotels are all westernised, but in the towns they do still choose non-western toilet facilities. If you haven’t experienced the squat-style long drop toilet, you may be in for a shock.”

A worthy tip for anyone who’s successfully managed to block any recollection of camping as a child from Matt, our Luxury Travel Consultant. Having just returned from a rigorous review of the hotels of Oman – we’ll get to those later, first, a little taster – he subjected himself to classically styled loos, penetrating rays and questionable airline snacks so you know what to expect.“We flew there with Oman Air and I’d highly recommend them – best economy seats I’ve ever flown in. The service was impeccable, seats were spacious, and they even have internet if you really can’t wait 7 hours. The snack chicken or veggie wrap wasn’t great, but that’s the only fault I could find.” 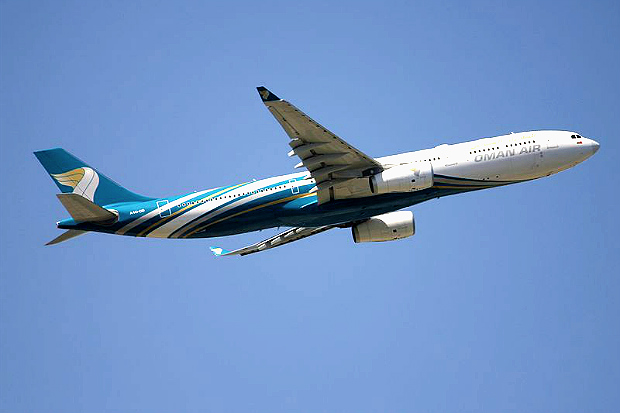 With no startling revelation from the world of airline food, Matt touched down for his inauguration to the Middle East. 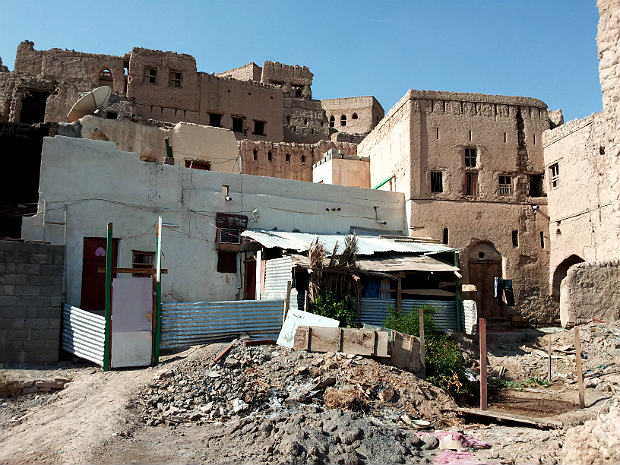 First impressions of Oman are of an obviously Muslim country. Men dressed in the traditional long white garb of the Dishdisha are everywhere. Women meanwhile are seldom seen during the day, remaining inside. Upon emerging in the cool evening they wear long black robes with full black headdress. As such western women are by and large expected to dress respectfully, and cover up when inside a mosque.

A bit of a culture shock, perhaps, though Matt says one quickly becomes accustomed to the cleanliness, the smartness, and inherently respectful of the prominent Omani lifestyle.

“There are many preconceptions about Muslim countries, mostly negative due to the media coverage. But most people simply don’t know about the culture. I found the Omanis incredibly welcoming and kind. As long as you respect their culture, they can’t do enough for you. And I’ve never felt safer in a foreign country.” 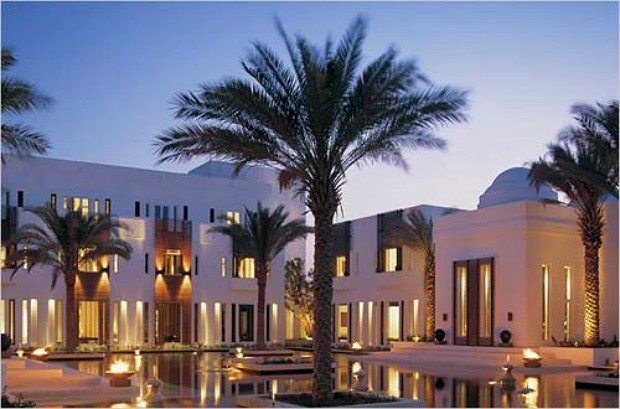 Given the often-unbearable heat of the daytime, the streets are quiet until the light fades. As evening takes hold a cacophony of souks and markets sound the start of business en force, and the hustle enlivens into the wee hours. It’s a vibrant, bustling marvel to explore but don’t expect to be drinking through this, especially not on the streets.

“There’s no bars or pubs in Oman, apart from in the hotels, which is a culture shock in itself!” laughs Matt.

Although the resorts will accommodate western ways of entertaining ourselves, even these regularly employ drinking curfews. Nevertheless prepare to wander, wide-eyed, and uncover some gems around the souks.

“The lack of pricing can bother some people,” explains Matt. “But if you can get over the souk barter system then you’ll be OK. Just get in there. Start low, meet in the middle, and enjoy!”

For his sins, Matt managed to secure a knock-off Omani football kit from the market. 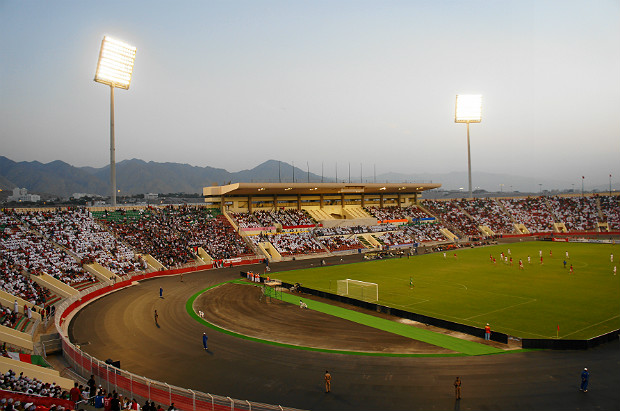 “We managed to fit in the Oman versus Jordan World Cup qualifier at the Sultan Qaboos sports complex. At first I was actually sat with the wrong country, but what an atmosphere! Knowing only one player – Ali Al Habsi (the current Wigan goalkeeper) – I turned and started a chant of ‘ALI AL HABSI! ALLLLI AL HABSI!’ We got shouts going ‘Again! Again!’ He’s worshipped out there; it was hilarious!” 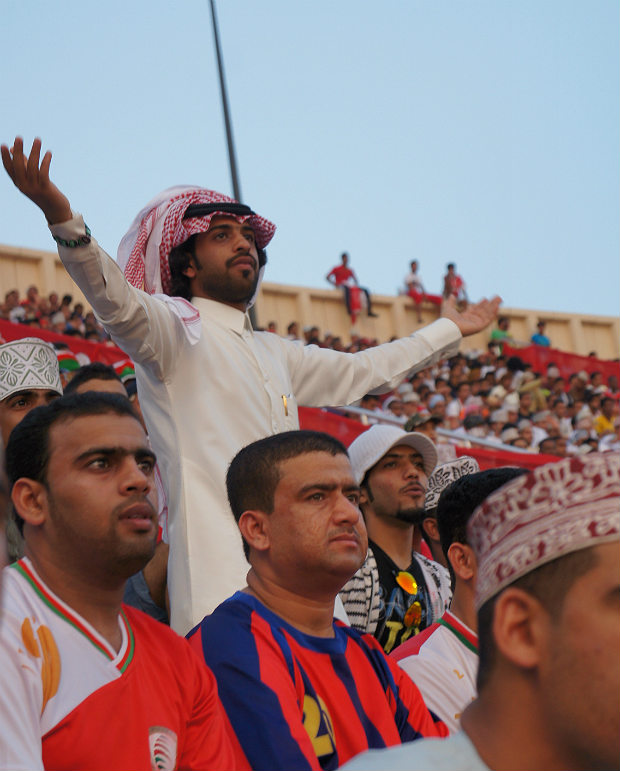 Time to Go on Holidays

A good time to visit is generally during the UK winter. However, that really could be anytime barring the third week in August so let’s just say from September to March.

Make no mistake, holidays to Oman will be hot. Very hot. And being a desert country this is mostly a dry heat. What’s more, Oman gets its fair share of extreme rays (UV-Index rating of 11 or more – the highest) so make sure you bring high factor sunscreen and drink plenty of water. The hours of 10am to 4pm will be the most intense.

“As long as you don’t go to the Muscat region or north east from June to August, you’ll be fine.”

In fact during this time most Omanis venture south towards Salalah to soak up the rain and cooler temperatures offered by monsoon season, after which rusty desert hues give way to a lush green-tinged outcrop.

Must See, Must Do

Whatever the time of year, Oman’s is a landscape that begs to be explored.

“The mountains are a must see,” says Matt. “Brand new highways slither in and around these huge jagged shapes. To get into some areas you’ll need 4×4 vehicles, same for the desert. I was bit gutted we had no time to venture into the desert proper for some 4×4 duning, but there’s always next time.

“We didn’t venture to any dive spots, but Oman has fantastic dive centres all along the coastline, especially as you head north. I fell in love with its vast empty beaches.”

The Place to Stay

First and foremost, a top tip for holidays to Oman apparently is to leave the travel adaptor at home. Everywhere uses UK plug sockets.

Secondly the choice of where to stay generally boils down to just how isolated one wishes to make oneself. 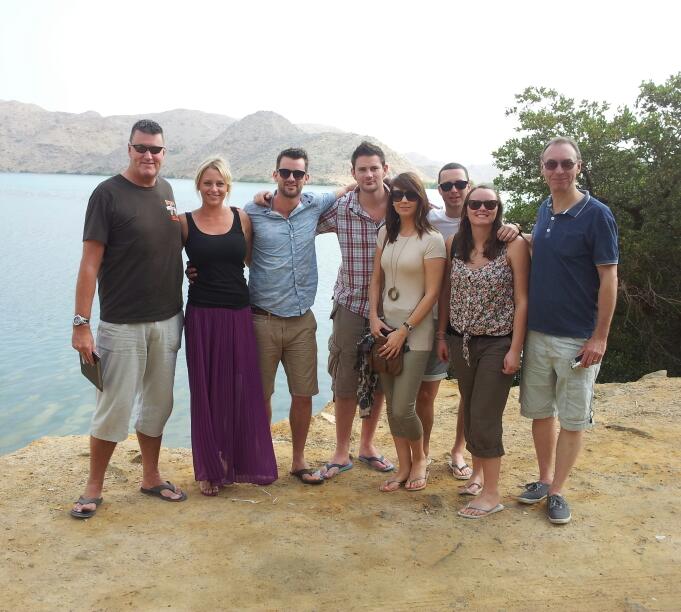 Hotels in the south of the country, found mainly in and around Oman’s second city Salalah are generally more conducive to ‘getting away from it all’ kind of holidays, not least because this south coast town is perched behind a mountain range. Spa-like surrounds, hidden pools and barely-touched beaches give these resorts a real sense of seclusion.

“You mainly go there for the relaxing experience,” says Matt.

Matt stayed at Jaweira Boutique Hotel and Salalah Marriott Resort, and had an extra nose around The Hilton Salalah Resort and The Crown Plaza Salalah.

“Jaweira Boutique Hotel is really for couples. It’s the only hotel in the area, very peaceful. Even though it’s surrounded by quite a bit of building work it had a great private sectioned off beach with a calm sea, and to the right of the marina a huge untouched surf beach.

“The Marriott is again very isolated, but actually would be great for families. It has the biggest pool in the UAE and there’s a kids playground and pool too. And a diving school.”

The Marriott is tied to a natural beach populated by jewel-like rockpools. Though perhaps not the ideal place for beach swimming, the view at sunset brings with it a very natural touch.

On to The Hilton and The Crown and what is striking of both properties, from otherwise modern, renowned hoteliers, is the dated design. Both, however, offer excellent sports facilities – The Crown has a driving range and pitch ‘n’ putt course – spectacular grounds and golden beaches. They are superb family getaways, but would ultimately suit any traveller.

Travelling north now towards capital Muscat, and the story is quite different. Matt stayed at Millennium Resort Mussanah, Sifawy Boutique Jebel Sifah, as well as checking out the Intercontinental Muscat, The Chedi, the lavish three-hotel complex by Shangri-La and the super-exclusive Al-Bustan Palace, a Ritz-Carlton hotel.

“I’d say the Millennium is best as a cheaper option for Muscat. The rooms are very nice but they’re still building the beach up and it’s still quite isolated.”

Still a distance from the capital, but nestled in a gorgeous coastal spot, Sifawy Boutique Jebel Sifah has a more Mediterranean feel to it. Perched beside a lovely marina, the scenery is undeniably romantic. A short walk down the promenade lands you at the beach. 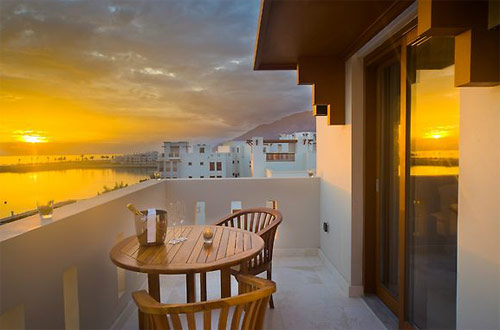 Into Muscat proper now and The Chedi was the real jewel in the crown. Cutting edge design with an incredible gym and spa, family-friendly, fantastic staff and the longest pool in the Arab states.

“Definitely the nicest hotel we visited and the best designed rooms, very classy.”

Next comes the Shangri-La. For those that don’t know it, Muscat’s Shangri-La is a complex of three hotels – Al Waha, Al Bandar and Al Husn – each to its own distinct character and clientele.

“Al Waha is a family paradise. There’s loads of entertainment and restaurants, generally just something for everyone. Great for the kids, and the big kids!

“Al Bandar is more couples orientated. It’s about halfway down the beach so it’s a little quieter. But to be honest you’re still in very easy reach of all the facilities and entertainment. There’s a very impressive spa complex and kids adventure indoor playground that the three hotels share.”

Al Husn, on the other hand, is the special one. We know this mainly because its guests may roam freely between all three hotels. Guests of the other two, however, are not permitted here. Complimentary minibar and afternoon tea, private beach, and the highest class of accommodation are just some of what separate Al Husn from its little brothers. It is, says Matt, one of the most exclusive hotels in the Arab states.

Last but by no means least is the Al-Bustan Palace, a Ritz Carlton Hotel. Given that its Royal 9th floor is completely reserved for royalty or presidential visits presumably this is the other most exclusive hotel in the Arab states.

“Not even the Sales Manager has a key to the Royal floor.”

The hotel is firmly in Muscat but feels a million miles away in its gated grounds, private roads and private beach.

As a whole, Oman offers 5-star luxury in droves and impeccable service as standard, though some areas are more up-and-coming. Fabulous properties in refreshingly isolated spots are sometimes offset by building work, so booking your holidays it’s worth doing some homework on the wider area around your hotel. When you do find the right Oman hotel, however, you can be absolutely sure of a pampering. Add to that a country of fascinating history, the warmest of welcome and diverse, barely touched landscapes ripe for exploration, and one finds holidays to Oman make for one delectable desert.

Click here and check out our holidays and hotels in Oman