Kenwood Travel’s Anthony discusses Borneo and Gaya Island, the hotels of Borneo and Malaysia, and how to get there feeling perky.

And don’t miss the chance of a free room upgrade on bookings at Gaya Island Resort, Borneo. Click the link at the end of this story.

Surviving the long haul flight, we all have our methods.

For some the anti-DVT exercises are an absolute must. Not for health reasons per se, rather the reassurance one’s leg is still being served by the circulatory system.

I’m a tall insomniac myself, so for me it’s a choice of bulkhead or emergency exit seats, or partial paralysis with concurrent senility. That is until everybody cottoned on and started charging extra, now red-eyes invariably come with dead-legs.

I am, however, delighted to announce a new technique – The Koumi Method. Colloquially known as the ‘Bank of Four’, the method is pioneered by Kenwood Travel’s highly intrepid Sales & Marketing Executive, Anthony Koumi.

“I had four seats and spread out across the whole row.”

So simple, so brilliant. Of course this only works on flights with a low turnout, but the results are proven.

“Ten hours’ sleep. No word of a lie. I genuinely believe that when a flight is empty, economy is better than premium economy. In premium you get a bigger seat and recline more, but can’t put the armrests up.”

The trick is to be the last to board. You may have to sacrifice the convenience of overhead storage space adjacent to you, but it affords a chance to assess the saturation of seat occupancy, and identify the gaps. Consider your jackpot the aforementioned ‘Bank of Four’.

Now, you might be tempted to go for it at this point. A bold move that could scupper your opponents, yes, but beware; it is generally airline policy to take off only with everybody in their allocated seats. Patience wins out if your counterparts stumble here. Once frogmarched back to their seat, the embarrassment will be too much for a reattempt. This is your window.

“Wait until the seatbelt signs are off, then rush to the row you spotted.”

It’s for this reason Anthony emerged “surprisingly perky” from his 24-hour journey to the island of Borneo. Waking up at 5am only to reach your destination by lunchtime the following day is a slog even by London standards.

“Easily the longest trip I’ve ever been on,” says Anthony. “We got a 10.50am flight and didn’t arrive in Kuala Lumpur until 7.10am the next day. Another short plane journey got us to Kota Kinabalu by 11.05am, and finally the hotel around 12.

“Malaysian Airlines were brilliant though, and it was all made easier by the extremely large A380.”

The new airliner seats 494 (on a one seat-one person basis). 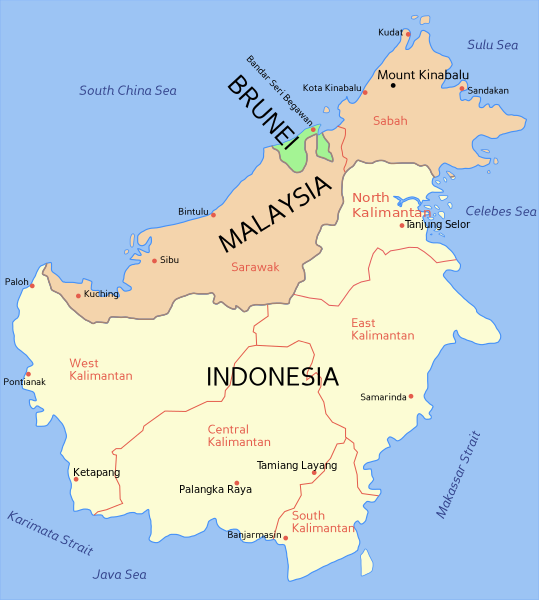 Borneo is the third largest island in the world, occupied by three nations: Indonesia, the vast, underdeveloped southern region comprising roughly three-quarters of the island; the Malaysian provinces of Sarawak and Sabah, former British colonies until 1963; and the Sultanate of Brunei, a small part of Borneo which relinquished itself from being a British protectorate in 1984.

Anthony arrived at Gaya Island Resort, a luxury hillside retreat embedded into the coastal rainforests of Gaya Island. A staggeringly beautiful spot and quite typical of Borneo luxury resorts. This small, dense jungle isle lies just off the northwest coast of Borneo, in the Malaysian territory of Sabah, near the regional capital Kota Kinabalu.

A popular resort with couples and honeymooners – they come for the scenery, but stay for the candlelit beach dinners – guests get a spacious treetop room with a view of a shimmering emerald, coral-rich ocean from the balcony. 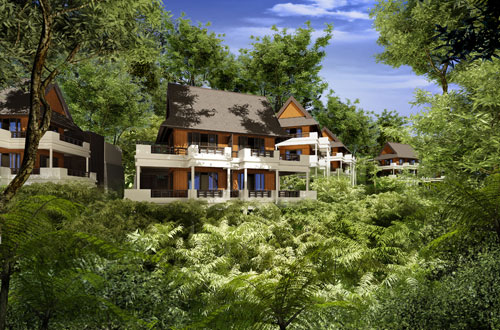 “We stayed for three nights. They had some fabulous meals. I’m not a fan of fish, but there comes a time in every man’s life when you just have to say ‘when in Rome’, and of course the seafood was excellent.”

Whilst there, Anthony was lucky enough to have a nature walk with the resident guide:

“We followed a trail in the resort, so we didn’t have to leave the island. If you’re into your nature you’ll go mad over this. It’s essentially a jungle on your doorstep. There are monkeys, although no orangutans, but they didn’t want to come out to play during our walk.”

The tour lasted about an hour and a half though an extended version can add another hour onto that.

Gaya Island, or Pulau Gaya, is a part of Borneo’s Tunku Abdul Rahman National Park forest reserve and the 5-island archipelago of Tunku Abdul Rahman Marine Park. The islands are densely packed with tropical flora that has developed unique ways of reaching the sunlight hitting the canopy.

“This is one of the trees we saw, a strangler fig. It wraps its roots around a host tree…”

On Your Borneo Bike

The next day, Anthony and friends headed out by bike to explore the villages of the island. As a means of absorbing the scenery this was ideal, and a welcome respite for Anthony.

“It was so nice to get a chance to see the real Borneo. What’s the point in travelling halfway around the world on back-to-back flights to sit by a pool?

“When you spend the whole time in a resort you don’t get a feel for the country. You almost forget where you are.”

The head of one village welcomed Anthony and friends into his home as if they were family. And as with any close family, this means a hearty meal and stiff booze. 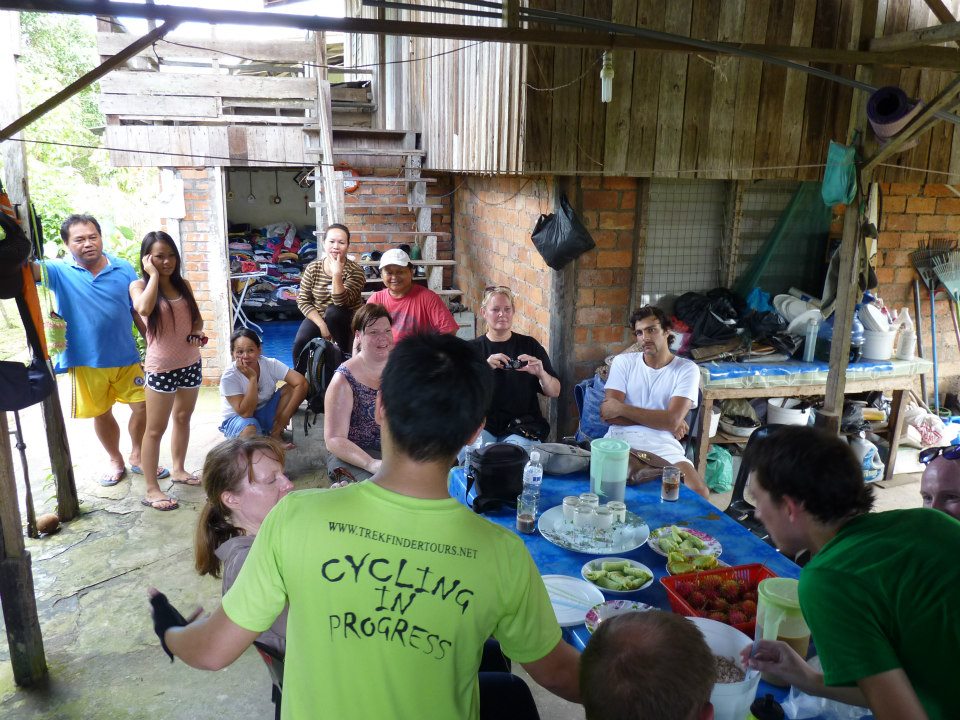 “He gave us rice wine to drink. It was strong and foul, like a mixture of white wine and whiskey with a mushy consistency. This was mainly due to the little bits of rice floating about.

“Afterwards he showed us his trade, walking us through his rice padi and over to the rubber trees.” 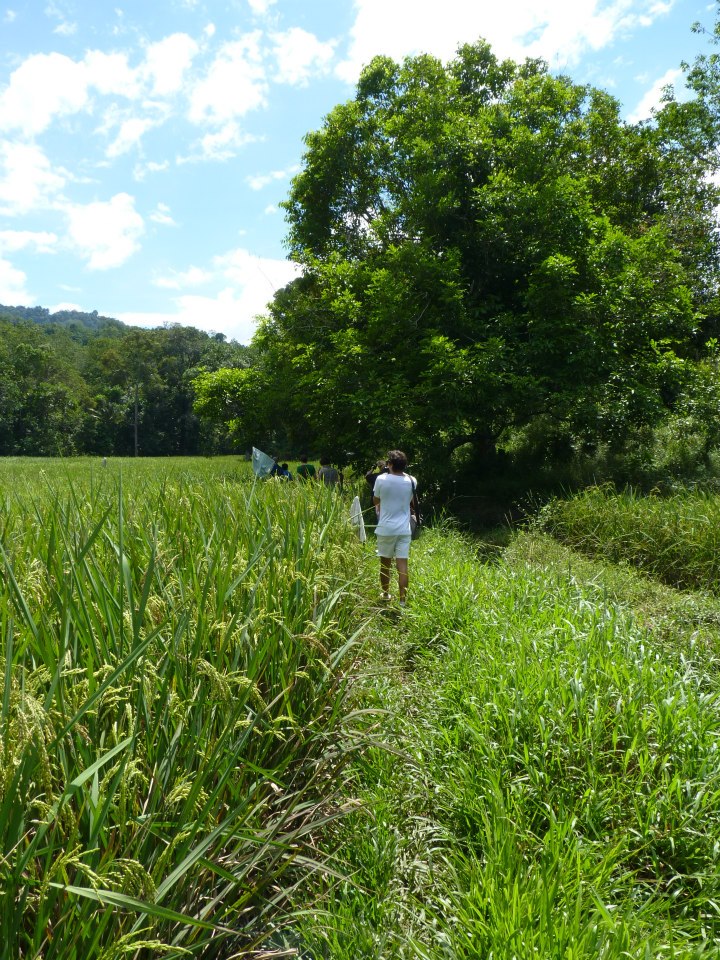 A time when Anthony was knee-high to a rice padi

The evening comprised a leisurely cruise off the coast of Borneo, the dramatic sunset brought sensationally to life by patchwork cloud cover.

“It’s much better when it’s cloudy. You get the different orange and red tones…” 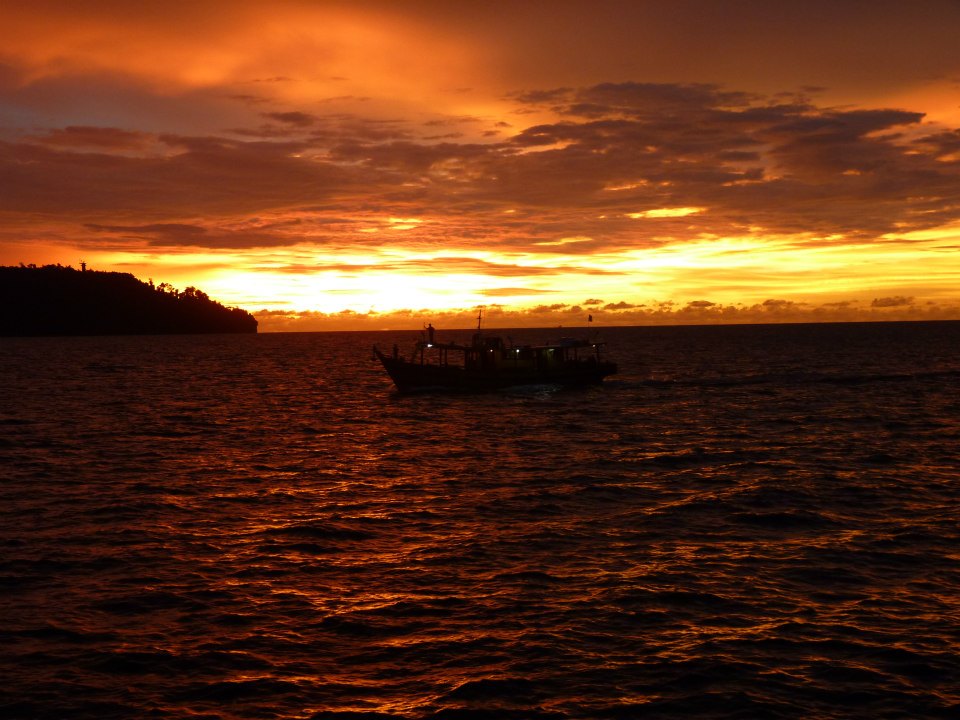 The reefs that surround Gaya Island are strikingly unspoiled. To its credit, it’s not a renowned dive spot. The next day the group managed to organise snorkelling with resident marine biologist, Scott, on the house reef.

Resident marine biologist? House reef? Did they order a primordial soup of the day?

In a way, yes. Beyond directing one’s attention to the orange-striped clownfish, stingray and turtles that circle you as you explore these underwater gardens, having an experienced marine biologist on hand has more fundamental benefits:

“November is the season for jellybugs, as some of us regrettably found out,” says Anthony. “Jellybugs are essentially microscopic jellyfish. The stings are nowhere near as severe as their much larger cousins, but the resident divers and a few members of the group complained of irritations and itchiness all over their bodies.

“The irritations become worse the longer you’re exposed to them, but a bit of vinegar cures the problem. The resident divers have been suffering and since then they’ve invested in full body protective clothing.”

The next day Anthony et al transferred back from Borneo island to the Malaysian mainland, to Malacca (aka Melaka). They stayed at The Majestic Malacca, a historic property now run by the illustrious hotel group YTL. The antiquated look and feel of The Majestic, from its Dutch colonial, mansion house exterior to its marble flooring, teakwood trim and intricate artwork was as immersive as it was impressive.

Malacca itself is a slice of old Malaysia. Once a balmy fishing village, around 1400 the first sultan established the Malacca Sultanate. Since then the region has grown and changed hands of ownership many times, including to the Portuguese, Dutch and British, until in 1946 it ceased to be a colony and joined the Malayan Union, soon to become Malaysia.

In 2008, Malacca was designated a UNESCO World Heritage Site, and earlier this year was announced as the site of a new Malaysian spaceport.

“The highlight of Malacca was definitely the night market. It’s open from 6-10pm and is full of stalls selling all the usual and some unusual items. Plenty of toys, lighters, wallets, t-shirts, electronics, also artwork and carvings.”

That night the group ate particularly well at the hotel, retiring to a local boozer to watch a Chelsea Premiership game accompanied by metres-high towers of beer.

“It comes in this massive tower with ice down the middle to keep the beer cool. 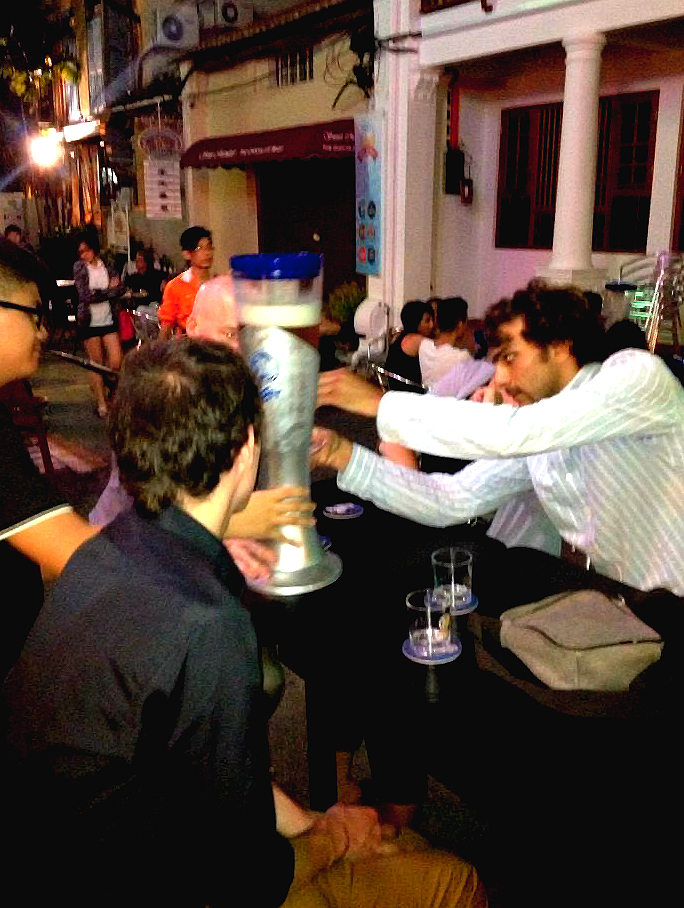 “On the way back we took a leisurely stroll to the hotel but the girls decided to take a Tuk-Tuk, which bumbled along the street playing techno music really loud. It was brilliant!“

Having witnessed this beautiful and seldom explored island, Anthony and friends hopped back on a flight to Britain. I am remiss to report – fully booked.

“I feel pretty rough now. What day is it?”