With the Christmas buzz and New Year’s hype ending almost as quickly as it began, and with temperatures plummeting, reaching whole new levels of freezing, it is no wonder that everyone seems to be in search of the next best thing, all of us looking hopefully toward that not-so-close summer season, the promise of sunshine getting us through the dismal winter. But, in our desperation to escape these Arctic conditions, it is easy to skip ahead, planning how we will spend those glorious summer months but overlooking one all important season just around the corner….Spring!

Spring brings about the very welcome milder climate as well as Easter celebrations, half term, or unlucky for some….exam season! However, the coming of Spring in other cultures across the globe is an occasion of entirely different significance, and one marked with unique celebrations and traditions. But one country in particular takes the crown for its incomparable atmosphere leading up to and during the Spring months….No one does Spring quite like Japan.

The Sakura and Hanami

So what exactly makes Japan holidays so popular during the Spring? The answer may be somewhat unexpected…It all has to do with cherry blossoms. When we think of springtime we often think of the pretty splashes of pink as blossoms begin to appear on the previously naked trees. I know what you are thinking…we have blossoms here, so what’s the big deal? Well, the cherry blossoms or the ‘sakura’ as they are known in Japan, aside from being the national flower of the country, are also a prominent symbol in Japanese culture of new beginnings, hope and renewal. The arrival of the cherry blossoms is keenly anticipated in Japan, and the excitement as to when they will appear builds up months before Spring has even arrived. As the Spring approaches, continual news reports provide updates on when the first flowers might bloom and where will be the best places to view them.

Viewing the ‘sakura’ has been a century-long tradition in Japan known as ‘hanami’. A contagious energy and unanimous sense of joy spreads across the country as people flock to the parks to view the marvellous bursts of colour that the blossoms provide. Locals throw ‘hanami’ parties which involve picnicking together under the trees and admiring the visually stunning sakura displays. It is not unusual to witness people preparing for their hanami party days before the event itself, laying down their picnic blankets along with their names and the time that their party will be held in order to reserve the area. These parties are often feasts that can go on well into the night. Night time cherry blossom viewing is referred to as ‘Yozakura’ and is often just as popular as daytime viewing since the trees are lit up by paper lanterns, creating a romantic setting.

The sakura is a breathtaking sight to behold and seeks to highlight all of the natural beauty that Japan has on offer, making a holiday to Japan at this time a truly unique cultural experience. One thing is for sure, it will forever change the way you look at those blossoms outside your window.

When is the best time to see the sakura?

When the flowers will appear depends entirely upon the climate; the milder the climate, the sooner the sakura will arrive, hence the best time to view the cherry blossoms will depend upon the part of Japan that you go to. In the southern islands of Okinawa for example the blossoms can appear as early as January due to the hotter climate. In the major Japanese cities such as Tokyo, Kyoto or Osaka however the flowers will typically appear in late March or early April.

Although it is best to view the flowers within a week of them blooming (before they begin to fall from the trees and glitter the pavements), they can be viewed in most places through to May.

Where are the best places for hanami?

The sakura can be viewed all over Japan, but some places provide particularly breathtaking or lively viewing spots. For example: 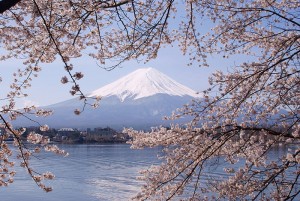 Lake Kawaguchiko: The cherry blossoms in this location complement the already magnificent vistas of the picturesque Mount Fuji and the stunning lake at its feet.

Lake Motosuko: The Shibazakura Festival takes place from mid-April at the Hitsujiyama Park. In this festival hundreds of thousands of Shibazakura flowers are planted at the foot of Mount Fuji creating an unbelievable wash of bright pink and purple colour. These flowers enhance the effect of the sakura, which are already in full bloom at this point, and continue the springtime festivity. 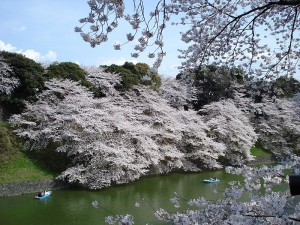 Ladies, you will appreciate this one… At the Chidorigafuchi Moat it is possible to rent a boat and sail along the moat as you admire the sakura. Later in the season the blossoms will fall into the water, filling it with thousands of floating pink petals. Its like a scene straight out of your favourite chick-flick! (Nicholas Sparks himself couldn’t invent a more romantic setting.-Ed)

Ueno Park: This is one of the most popular hanami spots in Tokyo and holds the larger (and wilder) hanami parties. It is a popular hanami location for younger crowds and those looking for a lively atmosphere. 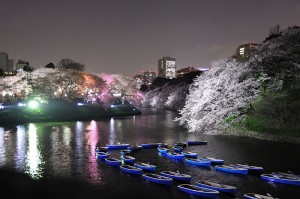 Meguro River: This spot is perfect for an evening stroll. The 820 trees overlooking the riverbank are spectacularly lit at night by lanterns and city light, creating a dreamy pink glow along the river. The spot is a popular choice for locals and has been nicknamed Sakura Promenade. It is also conveniently dotted with shops, bars and restaurants. 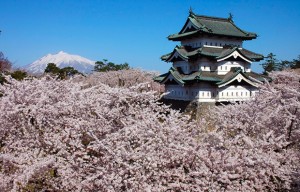 Osaka Castle: The Osaka castle boasts over 400 cherry blossom trees in its grounds. Nishinomuru Park is an especially good location for hanami, with fabulous views of the castle and the cherry blossoms which frame it. Osaka Castle is one of the most famed castles in Japan and is the epitome of traditional Japanese architecture. 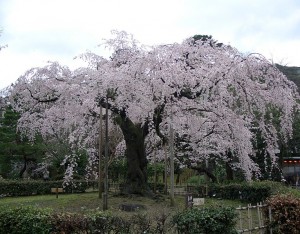 Maruyama Park: Beside the Yosaka Shrine, Maruyama Park is one of the most popular hanami spots in Kyoto. Known for its hustle and bustle and energetic atmosphere, the park also has as its centerpiece a grand weeping cherry tree which gets lit up come night time for more dramatic and spectacular views. What’s more, especially for the occasion the park sets up temporary food stalls and restaurants with tables beneath the newly blossomed trees for guests to enjoy a taste of Japan while admiring the sakura.

For a chance to view the sakura for yourself in some of the best hanami locations, check out this exciting tour itinerary.