We’ve seen the sci-fi or fantasy films set in worlds where animals rule the roost – Planet of the Apes instantly springs to mind. Although apes riding around on horseback, armed with artillery, talking, reading and writing English may seem just a tad farfetched, these real life examples of animal dominance make the idea of animals taking over seem much less unbelievable after all:

Planet of the Pigs 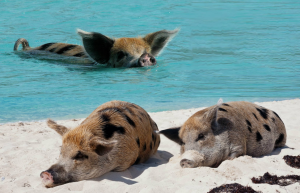 In Exuma, the Bahamas, just a short boat ride from Fowl Cay Resort lies an island totally uninhabited except of course for the pigs who have claimed it as their own. The rulers spend their days idly snoozing on the white sands, taking a dip in the crystal clear Caribbean waters and generally loving island life. Despite the many different hypotheses no one knows how the pigs, who are not native to the island, actually got there. The adorable pigs however seem to have capitalized on their cuteness, taking full advantage of the effect it has on us humans and earning themselves snacks from passing fishermen and tourists. 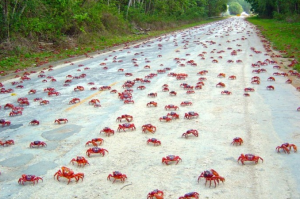 Each year an army of over 50 million Indian Ocean red crabs emerge from the forests to conquer Christmas Island during their march of mass migration to the sea. The island becomes so submerged in crab chaos that the suddenly outnumbered human inhabitants have no choice but to surrender to the dominance of the imposing creatures, closing the roads to accommodate the crabs and allow them to cross safely. 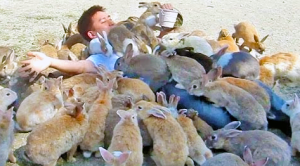 Okushima Island in Japan might just be the cutest place on Earth! The island has become a rabbit enclave where the hundreds of thousands of bunnies that run the place roam around freely, undisturbed by predators. When curious humans arrive to the island they are greeted by a flurry of furry friends at the ready to receive any treats the visitors may have brought for them. 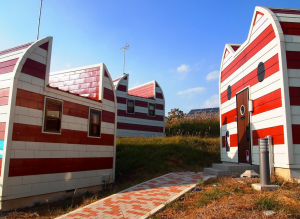 Tashirojima, Japan, aka Cat Island is literally the Mecca for crazy cat ladies across the globe. As the amount of cats began rapidly increasing, the number of people plummeted. The humans however seem not to mind that they have been driven out by the feline overlords. In fact the cats are something of a deity on the island and humans have gone as far as erecting cat shrines and cat shaped houses in honour of their new masters. 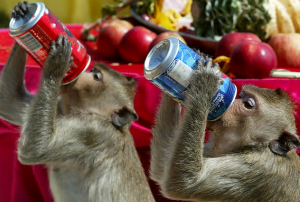 Lopburi, Thailand is best known for its resident celebrities – the mischievous macaque monkeys! The cheeky macaques roam town as if they own the place, clambering up the ancient temples, leaping from pole to pole or from tourist to tourist, pinching food from people’s hands, and stealing fruit from the markets. Despite having lived alongside humans for so long, the monkeys have yet to master the art of social etiquette, and are known to chill on hotel balconies or rudely invite themselves to guests’ meals at outdoor restaurants. Despite the monkeys being somewhat of a nuisance to locals, they have drawn so much of the historic town’s tourism that an annual festival is held in their honour. Each November Lopburi hosts a monkey buffet in which over 4000kg of fruits, vegetables, treats and toys are placed in giant pyramids beside the temples. Monkeys congregate in their thousands to enjoy the epic feast held just for them.

This Antigua sandbar is governed by southern rays who have made it their home. In fact, so many stingrays flocked to these waters that it became known as Stingray City. Over time the rays have become so accustomed to human interaction that they are extremely friendly, making swimming with them and petting them in their natural habitat an unmissable Antigua attraction and an unforgettable highlight of any holiday to Antigua.