We were tracing the southern ridge of the Himalayas, alongside Darjeeling and Katmandu, when Annapurna Mountain – and then Mount Everest itself – emerged above the cloudline on the horizon. They may have been 200 miles to our left, and glimpsed only fleetingly through an aeroplane window, but their scale and scenic drama were clear to see.

Our ten-strong team of Kenwood Travel Far East experts were jetting off to Thailand to discover the real ‘land of smiles’, and our EVA Air flight from London to Bangkok was following the Caspian Sea route east. By tracking the onscreen Skymap I knew the famous mountains would be out there somewhere, I just never expected to actually see them.

At a cruising altitude of 31,000 feet with a groundspeed exceeding 1,000 kilometres an hour, the drama of the scenery outside contrasted neatly with the calm Economy Class cabin of our Dreamliner 777. Soft colour tones and contemporary furnishings created a relaxing vibe on board, while ergonomic seats featuring shape-memory cushions and bottom-cushion seat-recline added extra comfort to the spacious legroom. 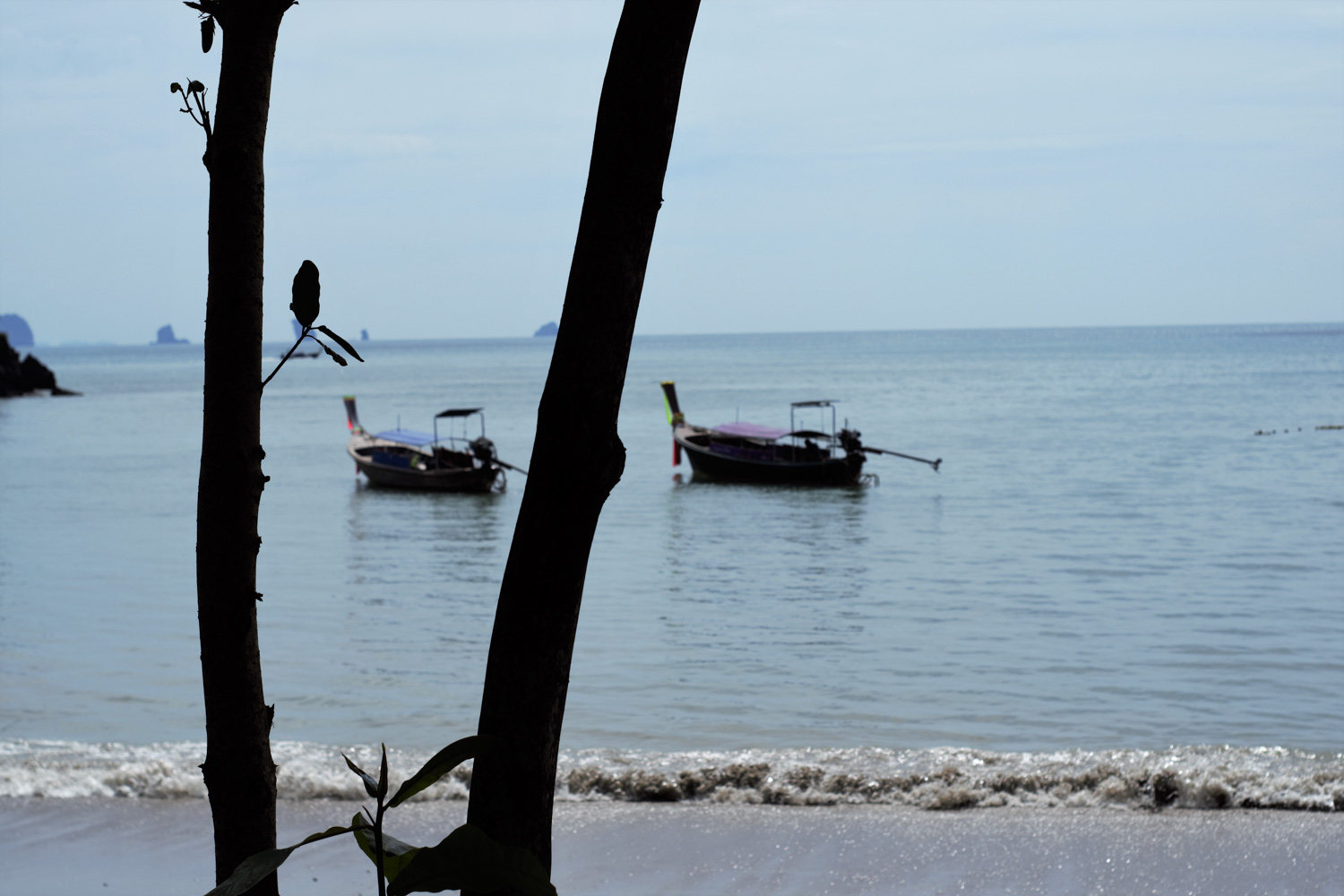 We all agreed the high-resolution touch-screens of the Star Gallery entertainment system were the biggest in-flight screens we could recall, as we selected from the wide-ranging on-demand film, music and gaming options. We enjoyed other features you’d expect to find in higher cabin classes too; not least the printed menus and metal cutlery that brought a touch of restaurant-style class to the meal service.

Thanks to a smooth transfer with our excellent ground handlers Destination Asia, it wasn’t long before we were checking in at the LiT Hotel Bangkok in the city centre. The instant appeal of its innovative design carried through into our rooms – the perfect place to recharge before heading downstairs for a five-course bistro dinner and hitting the bright lights of the Patpong district. Via tuk tuk, of course. 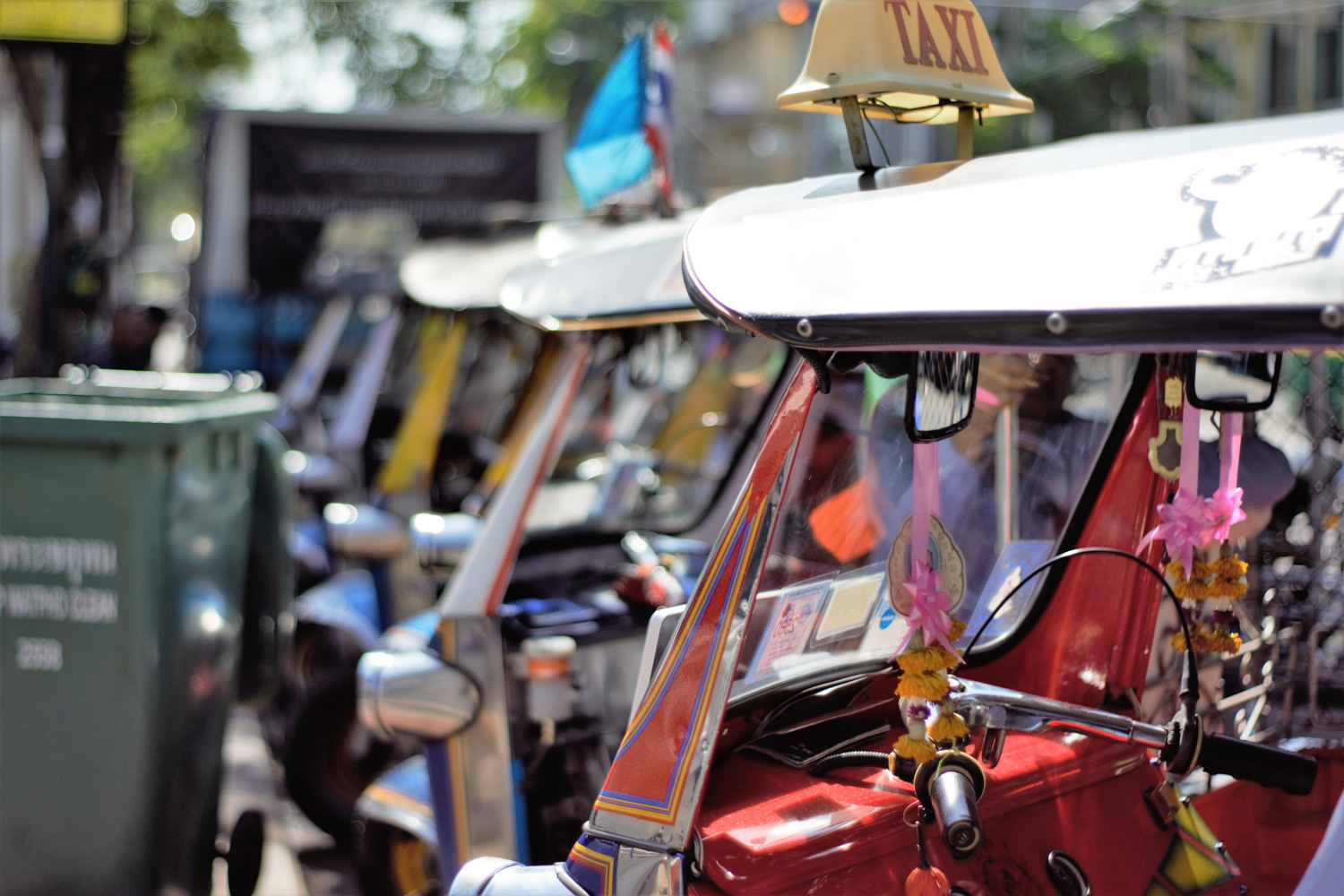 A tad bleary eyed, we began the morning after the night before with a City & Temples Tour courtesy of Destination Asia. Wat Benchamabophit , Wat Traimitr (Golden Buddha) and Wat Pho (Lying Buddha) all wonderfully illustrated the gentle spirituality of Buddhism in what was an inspiring day. 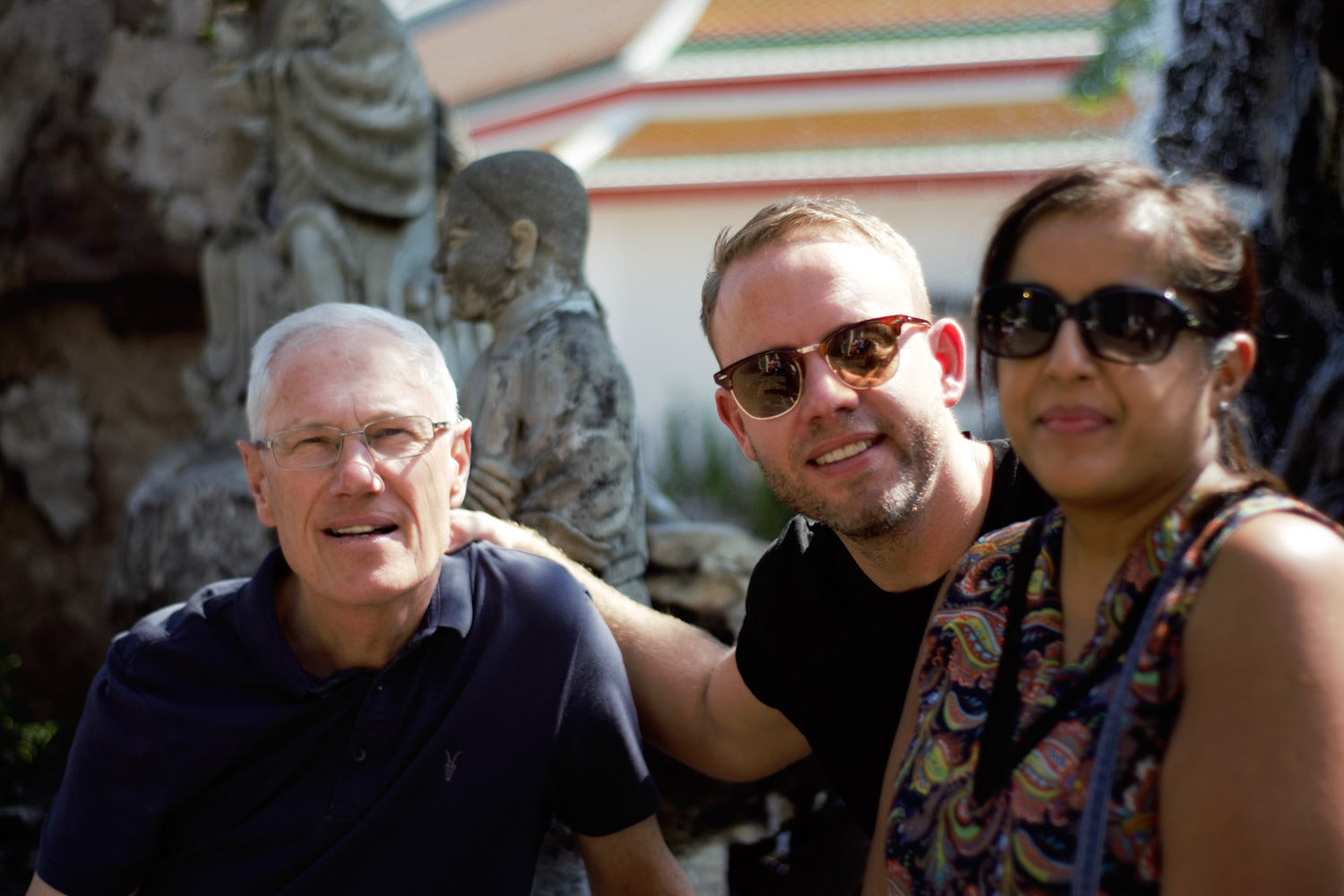 Our evening at the world-renowned Vertigo Bar at Banyan Tree Bangkok hotel brought a dash of glamour to the day’s cultural exploits. As open-air rooftop dining experiences go, there are non better, with breathtaking city views panoramically showcased by the smart layout of the venue’s split level design on the 61st floor. Couples got engaged (no one from our team, sadly), selfies were snapped and a delicious Thai-fusion banquet was enjoyed by all. We tracked down after-dinner drinks and dancing at the upbeat RCA (Royal China Avenue) street – a strip of pubs and clubs that comes well-recommended for a fun night out. 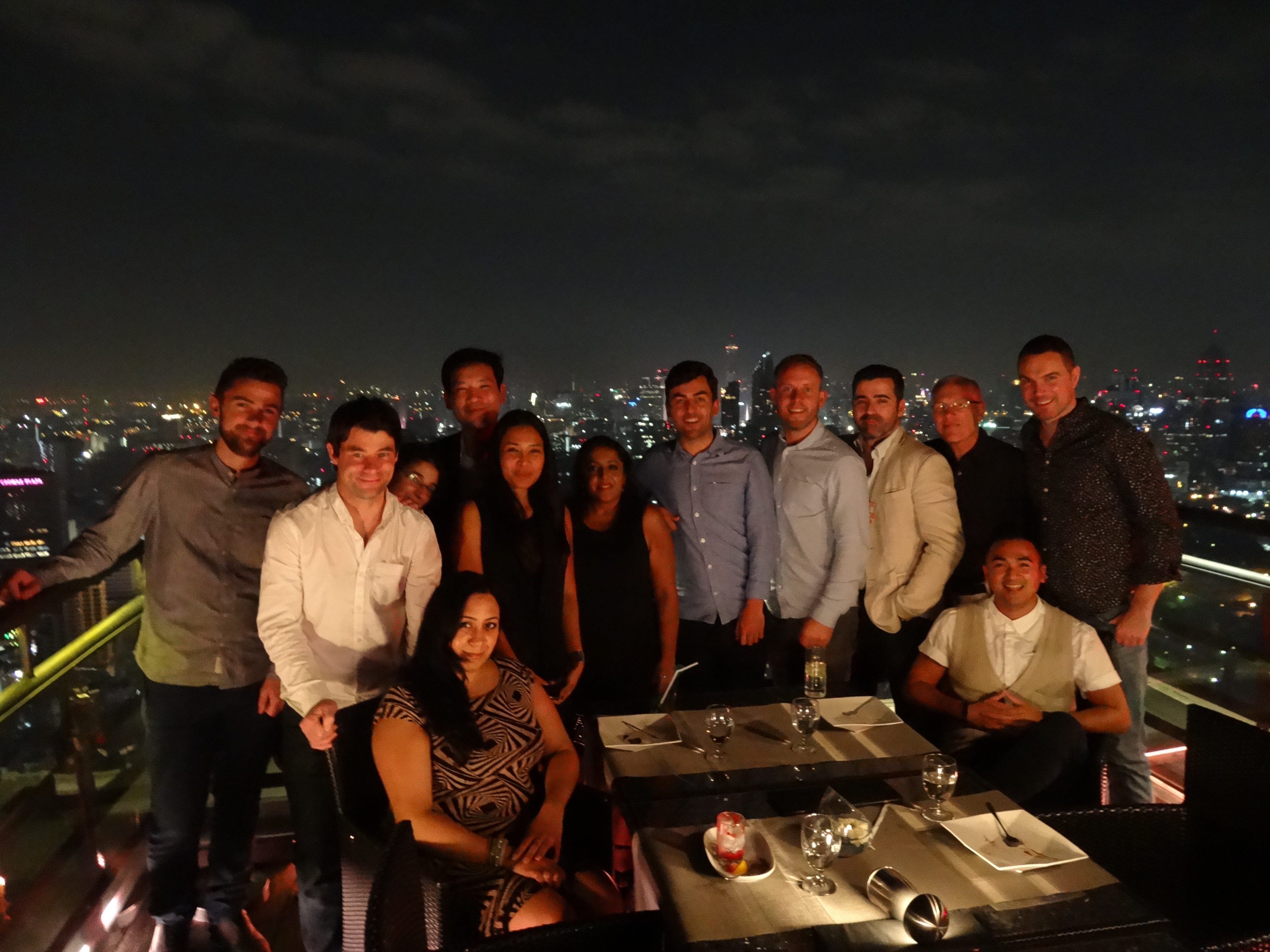 Bangkok had been a whirlwind of tuk tuks, temples and towering views, so it was with mixed feelings that we swapped its city thrills for our second Thailand destination. But the lure of some tropical downtime in a stunning coastal setting was too tempting to resist. A dawn pickup from our trusty Destination Asia reps whisked us to Don Mueang Airport for our short domestic flight to Krabi.

Krabi has long been the muse of travellers and filmmakers alike, and small wonder; its southwest coastal scenery is uniquely beautiful – think tree-lined limestone rocks and islets jutting majestically from opal waters. We were lucky enough to witness this from the air as we came in to land at Krabi International, and thrilled at the prospect of exploring it firsthand.

We checked into HQ number two of our Thailand holiday – the four-star Centara Anda Dhevi on Ao Nang beach – and sought some lunch. We found a fine selection of cafes and restaurants among the massage parlours and gift shops that thronged the strand. The afternoon sun began to take its toll so once back at base we cooled off at the freeform pool and swim-up bar.

After-hours Ao Nang is a mini Bangkok-by-the-sea that pulses with live music, cabaret shows, DJs and street food. No holiday to Krabi should be complete without exploring this bustling beachtown.

Centara Grand Beach Resort & Villas is cradled below a horseshoe of rainforested cliffs in a secluded bay; a stunning location for our next hotel. This is a private world of exotic luxury whose boat-only access, we found, creates an air of exclusivity. We took in our mesmerising new surroundings while attempting to reach dry land; a feat made trickier (and more fun) than it sounds by the floating jetty that undulated with the rolling waves.

After check-in we spent a leisurely day of R&R, basking on the soft-sand beach, swimming in the ocean, kayaking or just lazing around poolside. Our evening meal was hosted at the hotel’s incredible Hagi Japanese restaurant and turned out to be a holiday highlight. Suffice to say, there were whoops and cheers all round as our chef turned up the heat in the teppanyaki live cooking show, preparing tender wagyu beef, sizzling tempura prawns and other culinary masterpieces before our eyes.

Now, the official and sole access point to Centara Grand Beach Resort & Villas is via boat, We knew this. But we had also heard tell of a secret ‘monkey trail’ that would lead us through the jungle to Ao Nang should we miss the last boat. Fast forward slightly, and ten weary, wet-through Kenwood Travellers toast their success in conquering the trail, despite a tropical downpour. Troopers to a man. Disappointingly, no monkeys were encountered on the journey, but this would all change tomorrow…

It was fascinating to learn about the water gypsies – an ancient Thai people who live a floating existence on the ocean – from our guide at Zeavola. Zeavola is a rustic, barefoot-luxury hotel in Koh Phi Phi and we’d transferred there that morning to begin our boat tour of the local islands.

The adventurous spirit of our group, reinforced by last night’s monkey trail triumph, was revealed yet again as we anchored near Maya Bay for a spot of deepwater snorkelling. Back on board, the next stop on the tour was a sheer-walled island where troops of longtailed macaques clung to the cliff-face. We threw them pineapple and watermelon as our boat approached their hideout until their cheeky ringleader noticed the plate of fruit was empty.

He must have been particularly peckish because in a flash he and a pal had leapt onto our boat in the hunt for more food. But by now the boat had reversed too far from cliff for them to jump back, and despite their bravura you could tell they weren’t up for a swim. Mild panic ensued as it looked increasingly likely that we’d taken on two unwanted stowaways with big teeth. Luckily, we managed to coax them to the bow with more pineapple where they finally took the hint, hopped overboard and swam back to their rock. Phew.

After such an awesome week, it’s good to know your homeward flight is in the hands of a great airline, and when you get the opportunity to relax A-list style in the airport lounge, well, that’s even better. The brand new EVA Air lounge at Suvarnabhumi Airport is stylish and spacious with an international array of complimentary food and drinks as well as shower facilities and wifi. It certainly exceeded our expectations of what an airport lounge could be, and set us up perfectly for our flight home.

Huge thanks to EVA Air, Destination Asia, LiT Hotel Bangkok and the Centara group for organising such a fantastic trip. Special thanks to our hotel rep extraordinaire, Mr Wattana Watjanakomkul for being a wonderful host.

All photography and video by Kenwood Travel © 2016 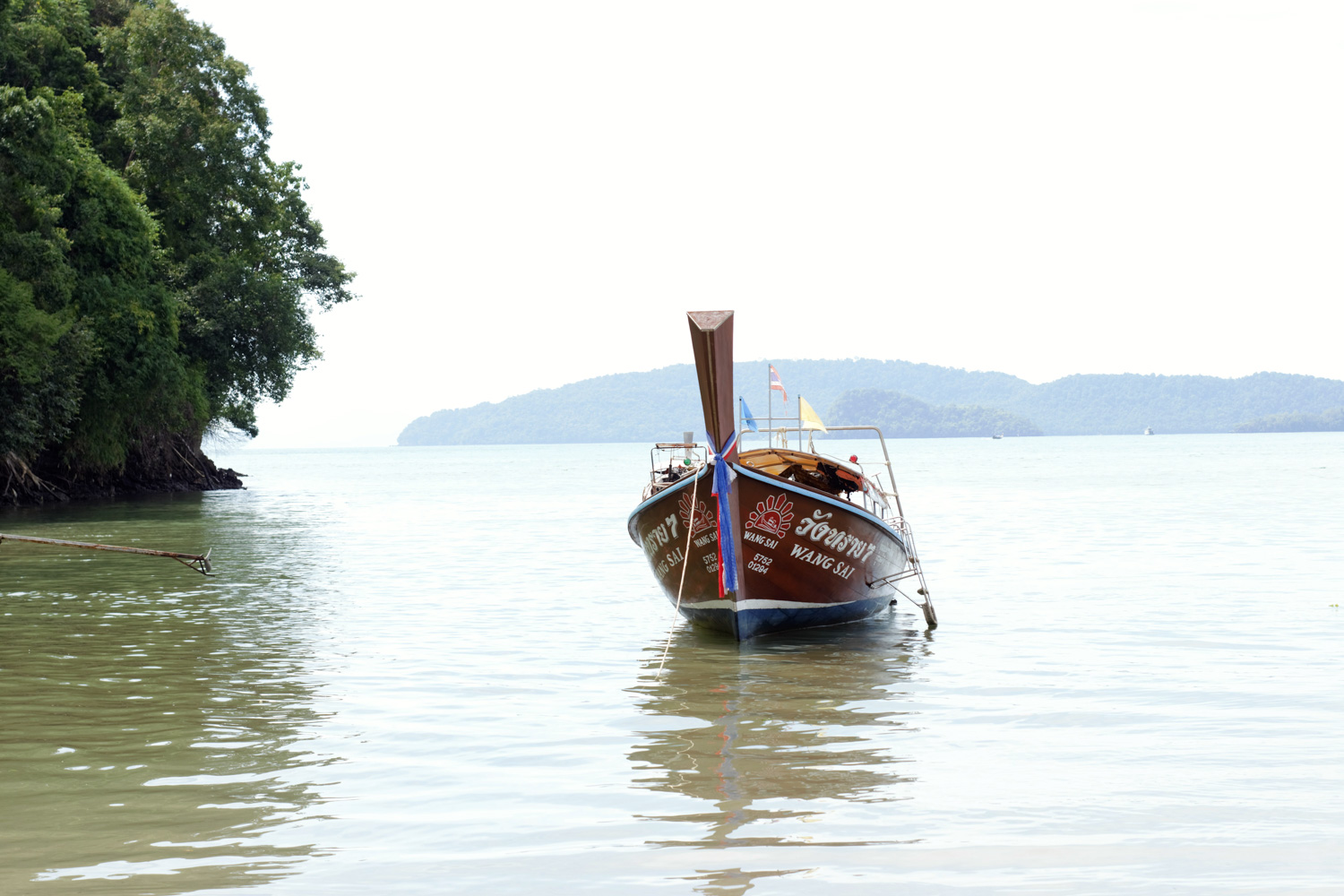