We all have identity crisies sometimes but this is taking the proverbial biscuit. This solitary creature thinks it’s an immortal God. Yes, the Turritopsis Nutricula (as it prefers to be known) has supped at the fountain of eternal youth and found a way to keep returning to its younger self, meaning it can press the “anti-age” button whenever it feels like and potentially live forever.

It does this via the cell development process of transdifferentiation, where the jellyfish takes a cell that has been altered from its original form and transforms it into a new cell. Essentially, it just renews all of its cells that have aged, causing it to revert to its younger self. However, unlike an actual God, the Turritopsis Nutricula can of course die from unnatural causes, for example if they are swallowed whole by a predator.

This goggle-eyed sea creature desperately wants to be a glow stick. Found in the cloudy depths of the Caribbean, the Hatchet Fish is not going to win any beauty contests in a hurry. However it might be a hit at an under-water rave thanks to its light producing photophores. So, why the glow? Well, it’s a clever evolutionary tweak to prevent predators from seeing the fish from below.

Rather than standing out by its shadow, the Hatchet Fish blends in with the light coming from above.

Caution: snapping them in half will not re-ignite their glow. 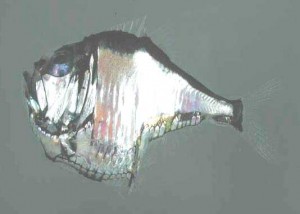 More identity crises? Here: Alex, born on a ranch in St Thomas, Barbados doesn’t know what he is. His mother, Botswanan zebra, was deprived of a suitable mate, luckily a mystery donkey appears to have stepped in and done the decent thing. It is certain that Alex is a zebroid (a zebra hybrid), but whether he’s a zonkey, zebrinny or zebrule none can be certain. Most are calling him a zedonk – suppose it’s better than zebrass. Whatever he is, Alex doesn’t seem to mind too much, his sexy stripes are a big hit with the ranch’s other equine inhabitants. Unfortunately for him however, like most hybrid animals, zebroids are usually infertile. 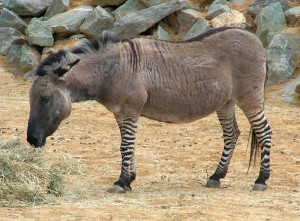 Blink and you’ll miss it. Looking like a discarded cast-off from a wayward chow mein, at least the Barbados Threadsnake (Leptotyphlops carlae) has one thing going for it – it holds the dubious accolade of being the world’s smallest serpent. Boasting a rather unimpressive 0.2 inches and the girth of a somewhat limp smidgen of spaghetti, it’s hardly likely to turn too many heads.

Non-venomous, prone to lurking glumly under rocks and considerably less imposing than an earthworm, this sorry speck of a creature can’t even claim to be the world’s smallest invertebrate. That honour goes to the parasitic anglerfish. Imagine being outdone by something called a parasitic anglerfish, shameful.

You’ve heard the phrase cheeky monkey right? Well these stealthy simians put their monkey mates to shame. These Vervet Monkeys live the life of a Caribbean tourist, spending their days supping on cocktails in the sunshine. It started a while back when one Vervet Monkey challenged his primate pal to a casual game of minesweeper, after eating one too many strands of old, fermented sugar cane. Stealing a few swigs of leftover pina coladas seemed like innocent fun at first, but a savage addiction developed and now these monkeys are permanently drunk, hangover or on the prowl for their next Strawberry Daiquiri fix. Experiments have shown that they even have similar drinking habits to us humans, some binge drink, some socially drink and some avoid it all together. Forget Booze Britain, watch this hilarious clip to see Plastered Primates: the Beach Version.