Once hailed ‘the fairest land on the face of the Earth’ by Christopher Columbus, the province of Samaná on the Northeast coast of the Dominican Republic is an absolute must-see, and is certainly one destination to add to the top of your bucket list. Laced in virgin rainforests, crystal clear waters and immaculate sugar white sands, the province is the epitome of laid-back Caribbean lifestyle, full of small fishing villages, coconut, banana and coffee plantations, and friendly locals who can be seen at all hours of the day playing dominoes in front of the picturesque backdrop of vibrant, multi-coloured houses. In fact, don’t be surprised if they invite you to join them since the ‘samanenses’ are known for their warm, outgoing nature. But despite the region’s unrivalled beauty, it has somehow managed to remain the Dominican Republic’s best kept secret, free of the rampant tourist development of its neighbouring coastal areas and instead showcasing the most unspoilt beaches in the country all the while going totally unbeknownst to tourists. However its not only the idyllic beaches, kind locals and picturesque landscapes that make Samaná so special. Samaná is also the setting of a fascinating annual tradition, a spectacular natural marvel. Each winter the Dominican Republic excitedly awaits the arrival of its most beloved temporary visitors… the Samaná whales. 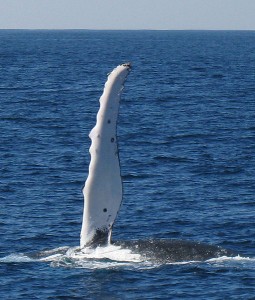 In a natural phenomena spanning back centuries, the humpback whales of the North Atlantic make their way to the Dominican Republic’s province of Samaná to mate and give birth to their young. The whales are expected in Samaná in late January and they will typically stay until March. Each year more than 3000 humpbacks visit Bahia de Samaná, Samaná Bay and Cayo Levantado, making the Dominican Republic one of the best places in the world for people hoping to catch a rare glimpse of these mighty sea creatures. In fact, there is no better opportunity for whale watching since at this time the humpbacks are at their most active and the males can often be seen smashing their tales against the waves, breaching (dramatically launching themselves into the air before crashing back down into the water), and flippering (rolling on their sides and slapping their giant flippers together)…or in human terms ‘showing off’… in a ploy to attract a female mate. Excursions to see Samaná’s humpback whales frequently depart from Samaná Harbour, and people come from all over the Dominican Republic with the sole purpose of getting that once-in-a-lifetime experience of watching these magnificent gentle giants in their natural setting.

Top 10 things to see and do in Samaná

If the whale sightings weren’t enough, here are some more perks to be enjoyed at Samaná: 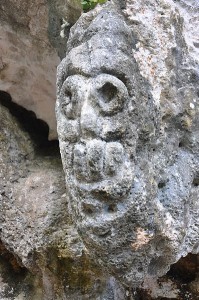 1. Los Haitises National Park-Trek into the wilderness and explore the caves where the fascinating ancient cave drawings of the Táino Indians, the first inhabitants of the Dominican Republic, can still be seen today.

2. Cayo Levantado- Also known as Bacardi Island for its starring role in an advert for the brand, Cayo Levantado boasts some of the best beaches in the Caribbean. With its ivory sands and cerulean waters it is a paradise you should  not miss.

3. ‘Pica Pollo La Fe’- A small shack near Guagua station famous among locals for serving the best Pica Pollo in Samaná. Picapollo is a Dominican style spicy fried chicken served with fried plantain and cassava. Wash it down with some delicious Dominican rum for a mouthwatering combination.

4. Zip Lining- For all you adrenaline junkies… Zip line over the scenic golden coastline, soaring through the trees as you enjoy a breathtaking birds eye view of the lush Samaná landscapes and coastlines. Samaná Zipline is just 15 minutes from Santa Barbara de Samaná, close to El Valle beach.

5. Swim with sea lions-  At Cayo Levantado’s Marine Life Experience get up close to sea lions and learn all about these playful ‘perritos del mar’ (dogs of the sea). 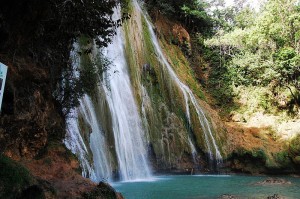 6. El Limon Waterfall: Ride on horseback through the tropical forests to this spectacular 120 foot high waterfall, and take a dip in the pools beneath it. 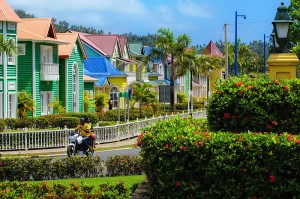 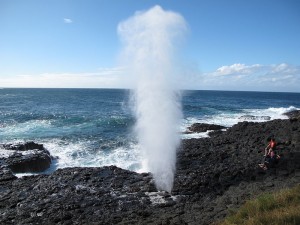 8. Boca del Diablo (The Devil’s Mouth) is another natural marvel; an impressive blowhole where the waves blast out of a hole in the rocks at tremendous speeds, causing a sky-high splash. The drive or trek to the blowhole is as memorable as the attraction itself with incredible views the whole way.

9. The Malecón Boardwalk: This small town is buzzing with dozens of unique little shops selling hand-made treasures, as well as outdoor cafés, restaurants, and lively waterfront bars where you can enjoy the beats of salsa, merengue or bachata.

10. Cabo Cabrón– Keen hikers will enjoy the long rocky road leading to this totally remote, uninhabited and fascinating location, which is in fact at the very edge of the Dominican Republic. The volcanic hillside offers striking views out over the ocean where dolphins can often be spotted. Enjoy a dip in the fresh waters of the isolated ocean, which you will have all to yourself.

Samaná really is an incredibly beautiful place gifted with so much natural splendour. How it has gone largely unknown for so long is an absolute mystery. To get the chance to see Samaná for yourself check out Kenwood Travel’s holidays to the Dominican Republic or call and speak to one of our Caribbean experts today. 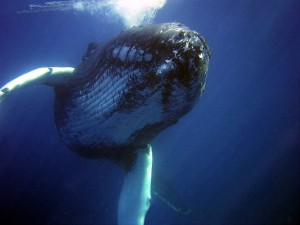