It’s a palm that beats all other palms. It’s the legendary Coco de Mer (Coconut of the Sea, in French).

Known to smart people in laboratories and libraries as Lodoicea maldivica, the Coco de Mer is a unique plant on several accounts. First, it only grows on the Praslin and Curieuse islands in the Seychelles and it is not willing to find a new homeland. Second, it is a proud world record-beater*. And third, it is very expensive, and you need an export permit to take its fruit out of the country. Just as Kate and Wills did, presumably, when they were given a Coco de Mer fruit as a present by the government of the Seychelles, when they popped in there for their honeymoon last year.

*It produces the heaviest seeds in the world – they can weigh up to 17.5 kilograms (that’s like a four-year-old child!). 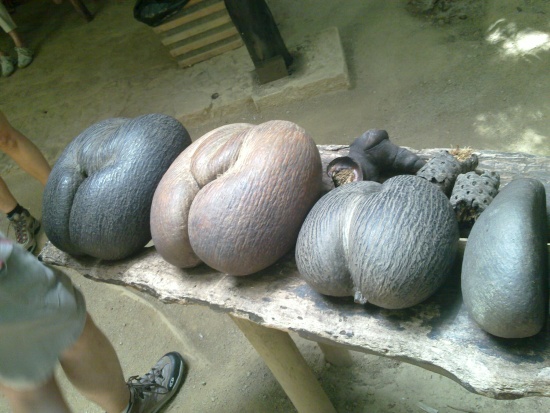 In Seychelles creole, the fruit is known as “Coco Fesse”, which can be loosely translated as “bum nut”. This refers to, obviously, its shape: with a rather short stretch of imagination, it may resemble a human bottom. Some even believe its inside flesh serves as an aphrodisiac, although this hasn’t been scientifically proven to be right and probably won’t be.But there’s more to the erotic side of the Coco de Mer story. Unlike other palms, such as the traditional coconut palm, the Coco de Mer trees are clearly divided according to their organs: the female trees bear giant nuts, while the male trees grow catkins (and enormous ones for that matter – up to one metre in length, these tube-like elements are covered with tiny yellow flowers). 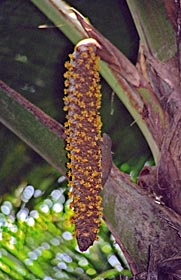 So a Coco de Mer fruit is an original souvenir to bring home from the Seychelles – it looks, well, intruiging, to say the least. It’s used in Ayurvedic medicine, Chinese medicine, and as a spice, but mostly it is grown as decoration. At home, if split in two, it can become a fruit basket for your kitchen or dining room.

But before you do that, stop and think. Isn’t it enough to just photograph it leave it where you found it? After all, it’s not like there are endless Coco de Mer forests left in the Seychelles. Many a fire have destroyed the trees’ natural habitats, and so great care has to be taken to preserve them (hence, conservation efforts and export permits). If we are to have these weirdly human-like trees in the future, the time to help save them is now.