But, where is the Bates Motel?

The hotly anticipated biopic Hitchcock opens today across UK cinemas, as powerhouse actors Anthony Hopkins and Helen Mirren recount the untold story behind Alfred Hitchcock’s masterpiece Psycho. In a reverent nod to the genius filmmaker, we thought to create a tour of Hitchcock’s America. Very much following a west-to-east kind of a theme, the concept is essentially a fly-drive holiday. Part 1 today starts in California, and tomorrow we head to the Atlantic coast for part 2. The idea is simply to jump in a car and absorb some of Hitchcock’s landmark sites and scenes across the US.

However, such a concept immediately presents a quite crucial question, and one that can’t strictly be answered: where is the real Bates Motel?

Depends what you mean by real, really. If you refer to the location where the director shot his 1960 thriller and that shower scene, then the actual Bates Motel stands firm in a cul-de-sac in Universal Studios, California. It tends to receive a lot more visitors and a lot less murder these days.

However, to find the real-life location of Hitchcock’s fictional building, you need to head a touch further east.

Secretary Marion Crane (Janet Leigh) flees Phoenix, Arizona, with a bundle of stolen cash, headed for her boyfriend Sam Loomis (John Gavin) in California. She takes a less-travelled highway, but is halted by heavy showers. Forced to stay at Norman Bates’ (Anthony Perkins) isolated motel, she takes a shower. This one turns out a tad heavier.

Unfortunately, the motel building doesn’t actually exist, and technically neither does its location. One publicised description of its real-life position ‘15 miles east of Fairvale, California and 23 miles west of Hitchcock, California on Old Highway 10’ renders questionable results. Fairvale is fictional and Hitchcock, California, is in the city of Santa Barbara, a distinctly un-isolated place that is definitely not en route to Phoenix. More to the point, to travel 23 miles west of here requires a boat.

Marion Crane did, however, stop on a less-trodden stretch of road off Interstate 10, which does exist. The road runs between Los Angeles and Arizona, and provides a spectacular version of the all-American road trip.

Put simply, it’s a great drive. As you leave Phoenix the green spaces give way to the tough, arid Arizona desert. You pass wildlife refuges and national parks as the linear Interstate 10 dissects the scenery, culminating in Joshua Tree National Park (U2 fans take note) and the Little San Bernardino Mountains, one of California’s most treasured expanses. Distinctive spherical rock formations formed from millions of years of weathering, undulating desert rock landscapes that form cliff faces ripe for climbing enthusiasts, dotted oases of unique wildlife and its signature piece, the unmistakeable Joshua tree. One of the major draws of this area is its nightlife, as astronomers and amateur stargazers flock from miles to camp on the higher ground. 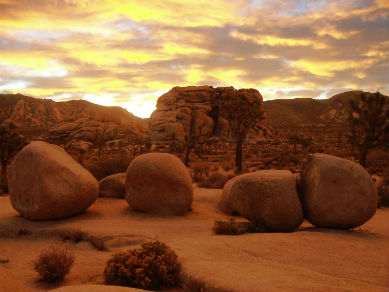 A little further along Interstate 10 and you hit Palm Springs, home to California’s highest peak Mount San Jacinto. At its summit, over 3,300 metres up, climbers say the lights of the Las Vegas are visible on the horizon in a clear dusk. A challenging and revered climb at its higher spots, Mount San Jacinto is nevertheless accessible to the common man, not least because of its famous aerial tramway. As we recently reported, it’s worth bringing a camera if only for the cable car ride.

Moving beyond the mountains the scenery once again begins to blossom. The trusty road winds you through towering evergreens and the shimmering lakes of San Bernardino National Forest before the sprawling expanse of Los Angeles reveals itself. Keep to Interstate 10 as you traverse the city, ending at the Pacific coast and Santa Monica State Beach; home of California’s pretty people on roller-skates.

Retired San Francisco detective John “Scottie” Ferguson (James Stewart) is asked to follow his friend’s wife Madeleine Elster (Kim Novak), who his acquaintance suspects is possessed. Scottie tails her to Fort Point, beneath San Francisco’s Golden Gate Bridge, where Madeleine tries to kill herself by jumping into the icy bay. Scottie saves Madeleine from the water and soon after, they develop an intimate friendship. Scottie spends a day with Madeleine, fearing she may again attempt suicide. They travel around the northern California countryside, and eventually Madeleine reveals details of a deep-seated nightmare, the setting of which Scottie recognises as a nearby church – Mission San Juan Bautista.

And at that, I should probably leave it for those that haven’t seen Vertigo. As of this point, mind is officially blown.

We pick up Hitchcock’s America where we left off – at Santa Monica – you head up the coast to San Francisco along California State Route 1. Known locally as Highway 1, the road in fact starts in Santa Monica, literally carrying on from where Interstate 10 stops. Which for the sake of our Hitchcock driving tour is freakishly convenient. 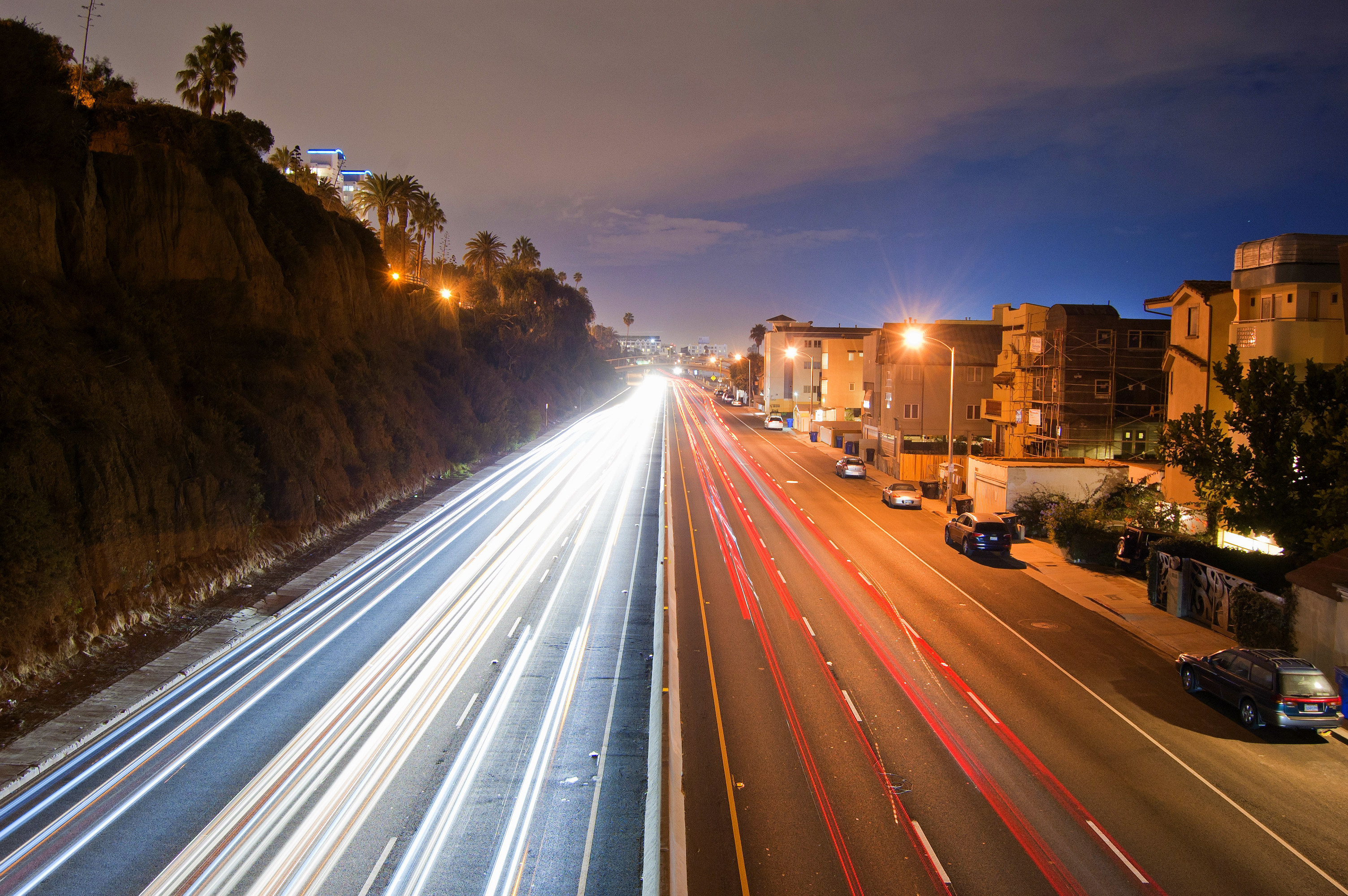 Also known as the Pacific Coast Highway, Highway 1 constitutes perhaps one of the world’s most famous road trips. It is also one which is fairly well documented, so rather than regale you with this part of the journey let’s fast forward to San Francisco.

I should note that for the purposes of staying loyal to the plot, the Hitchcock’s America tour here diligently follows the footsteps of Scottie and Madeleine. However, as you’ll see, Hitchcock’s characters do not necessarily take the most convenient route around the state. You might want to do this bit in a different order if you want to save some petrol money.

Scottie’s first port of call is the Golden Gate Bridge, which also happens to be a section of Highway 1. Fort Point is directly below your feet at the south end, and is a beautiful spot to see the city with the bridge towering above you. 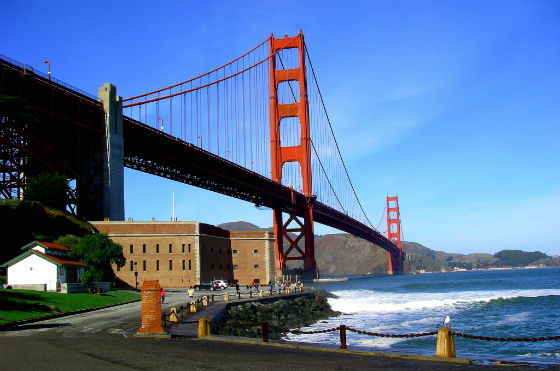 Following her suicide attempt at Fort Point, the possibly possessed Madeleine and the acrophobic Scottie opt for their day in the sun, beginning with Muir Woods. Again, rather conveniently Muir Woods lies just north of the bridge off Highway 1, and is a prime spot for California’s mighty giants, the sequoias. The magnificent trunks of these giant redwood trees split shafts of sunlight like a Venetian blind, making for an impressive walk in the park. 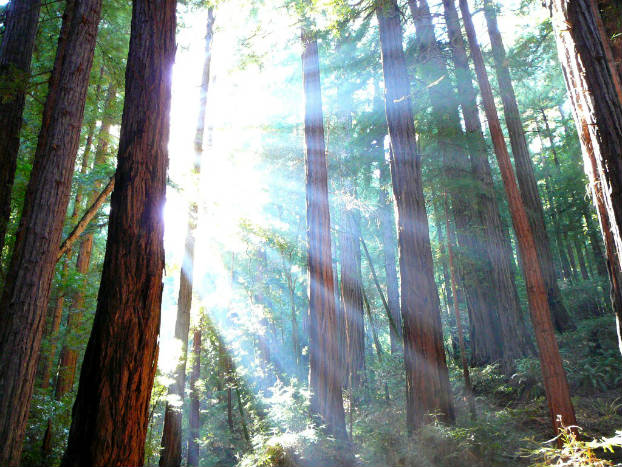 From Muir Woods the couple head south of San Francisco to Cypress Point. This coastal point on the south side of Monterey Bay also lies just off Highway 1 (this stretch of California is famously a favourite part of the world for the director, and I now start to wonder if Alfred Hitchcock himself built this road).

Cypress Point is known mainly for the golf courses, comprising cliff views that many golfers consider amongst the most beautiful in the country. It’s here on nearby Pebble Beach that Madeleine runs into the sea for a swim. 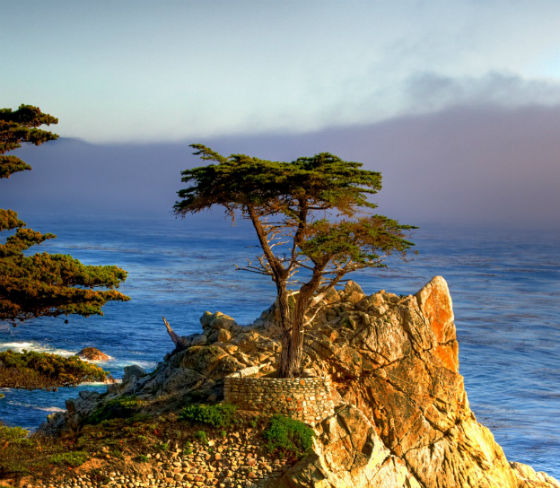 The film’s most famous and iconic sequences were shot at the Mission San Juan Bautista church. As you drive north along Highway 1 from Cypress Point, Highway 156 tails off inland. Follow this through a typical Californian countryside to the sleepy town of San Juan Bautista. You will find the infamous church on 2nd Street. If you do head to the top of the bell tower, try not to look down. 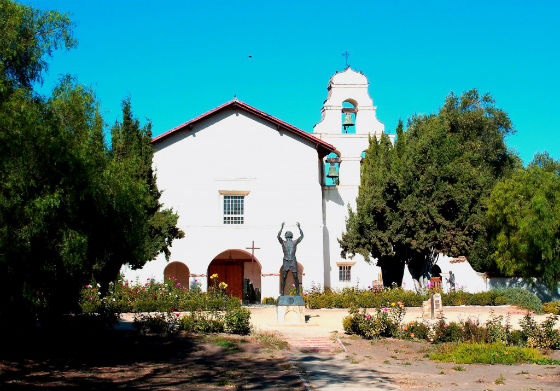 The Birds requires somewhat less of an introduction. The attacks by the titular tits and gulls, devastating as they were, were inexplicable. What is known is that these deadly swarms engulf the picturesque beachfronts, harbours and marinas of Bodega Bay, California. Bodega Bay is located on, um, Highway 1.

Heading further north from San Francisco, Bodega Bay reveals itself as a pretty, charming harbourside town. Fans of The Birds will delight in seeing the film’s scenes of chaos realised, and it is here that travellers can experience life in the picket fence coastal towns and evergreen forests of north California, a stark contrast with the start of your journey in the dry, desert south. To witness the difference is to appreciate just how diverse and enormous this seemingly slim state truly is. Even here in Bodega Bay, it’s still a good 6 or 7-hour drive north to the Oregon border.

Check back tomorrow as we head east to New York and Chicago for part 2 of Hitchcock’s America.