Humanity has always had a soft spot for wasting excessive amounts of money on projects doomed to failure. The Millennium Dome, the Death Star, Joan Rivers’ face, all glorious misadventures; yet few human endeavours have quite such a miss rate as theme parks. What follows is just a tiny example of some of the most extravagant failures in amusement park history. Some were the victim of terrible timing and impossible to foresee events others were the result of dreadful arrogance and terrible, terrible judgement. 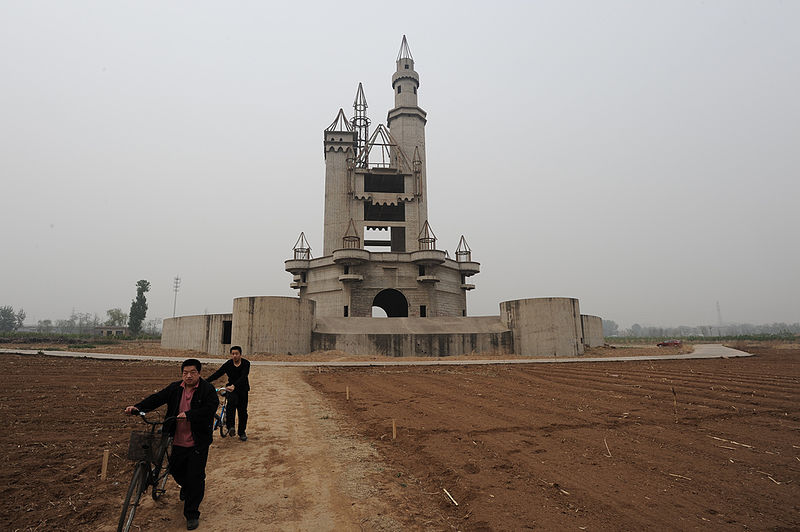 Given Walt Disney’s pretty seismic impact on the world of theme parks (among, many, many other things) it’s no surprise that when it comes to themed park imitators someone somewhere decided that instead of engaging in the risky business of designing a new park from scratch, why not just copy amusement park perfection?

Wonderland in China was to be a pretty much identikit version of Disneyland as well as the largest amusement park in Asia, covering 120 acres. Work on the project began in 1998 but pesky financial problems and arguments with local government got in the way and the project was ultimately halted. An attempt to rekindle plans in 2008 failed and the area is now being reclaimed by local farmers. A half-finished and decaying castle surrounded by crumbling abandoned ruins are all that remains: a magic kingdom turned creepy dystopian horror.

5. The Marvellous Land of Oz

Plans for a real-life Land of Oz have been around almost as long as the Wizard of Oz books themselves. As far back as 1905 Oz creator L Frank Baum wanted a theme park dedicated to his wonderful (if narratively suspect) series of children’s books. Newspaper reports from the era reveal that the author had earmarked Pedloe Island off the coast of California as a potential site. The theme park would be “a fairy paradise for children” and would include statues of the Scarecrow, Jack Pumpinkinhead and the Tin Woodman (as he is called in the books) as well as palace for Dorothy. Baum himself would live on the island. Plans even got as far as naming Dorothy Talbot of San Francisco as heir apparent to the Marvellous Land of Oz. Following the failure of the stage production of the Woggle Bug (another Oz character who pops up in the second book in the series) Baum seems to have abandoned the idea. Given that Pedloe Island doesn’t actually exist, perhaps the plans were no more than a publicity stunt.

And abandoned the Oz park would have stayed, until the turn of the millennium when plans for the Wonderful World of Oz were announced – an $861 million theme park in Dorothy’s home town of Kansas. Then it was discovered that, while L Frank Baum was a noted feminist, his liberal outlook didn’t extend to Native Americans who he seemed to treat with a disdain generally reserved for wicked witches. Newspaper reports from the 1890s (pre-dating the first Oz book) surfaced revealing that as editor of the Aberdeen Saturday Pioneer in South Dakota, Baum published two editorials that called for the annihilation of all Native Americans. The articles carried such weight it has since been speculated that his inflammatory copy might well have helped inspire the Wounded Knee Massacre of 1890, in which 150 men, women and children were killed at the Lakota Ridge Indian Reservation.

The editorials shook Baum’s legacy to the extent that relatives of the writer publicly apologised for what their ancestor had written. The theme park idea was once more abandoned and for the moment the extravagantly colourful Land of Oz remains tantalisingly out of reach.

A joint venture between Universal Studios and a subsidiary of Dubai Holdings this incredible theme park was budgeted at a thrifty $2.2 billion (inside the  projected $64 billion city of Dubailand). It was expected to host 5 million people each year. Themed areas would have included New York; featuring a Blues Brothers show, Jurassic Park Rapids Adventure, a King Kong duelling roller coaster as well as a Revenge of the Mummy themed indoor roller coaster.

After a lot of hubris and plenty of bluster the project finally broke ground on July 27 2008. Then the bottom fell out of the world economy and plans were changed to open in 2012 at the earliest.  The world is still waiting. Work started again on Dubailand in early 2013, so hope still faintly flickers.  Although given its website domain has been allowed to expire and a Universal Family Entertainment Centre is now being developed in the same area, maybe we shouldn’t hold our breath on this one.

If you do want to check how Dubailand is coming along, then you can book a trip to the land of Dubai via this handy link. 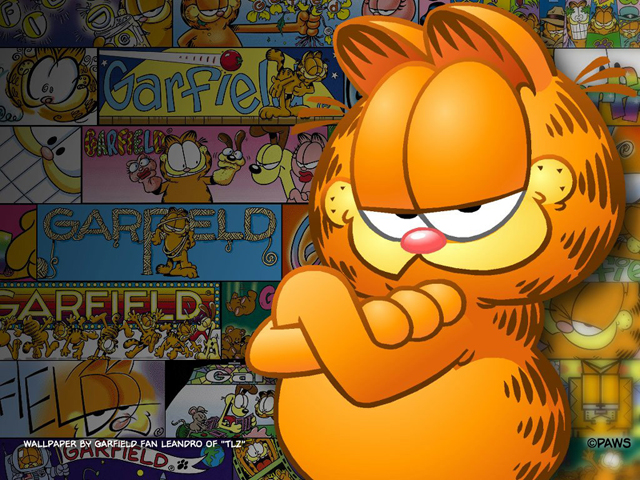 The screw-ball cat turned 3D character seems one of the more unlikely comic strip creations to be immortalisd with their own theme park but it did get as far as the planning stage. This was all down to the canny business instincts of Garfield’s creator Jim Davis, who was not only a terrific cartoonist but knew his way round a 10 dollar bill. His business Paws’ controlled the merchandising rights for the popular feline creation and are responsible for the designs for Garfield mugs, toys, t-shirts and other paraphernalia. They also drew up plans for a $120 million theme park, devoted entirely to the somnolent feline.

It would have been part of an ambitious portmanteaux known as Entercitement City that would have contained golf courses, hotels and a water park.  The final part of the 530-acre project was to be Garfield’s American Adventure, complete with roller-coasters, water parks and at least two toilets.

Alas, Garfield’s American Adventure was destined never to be. The project fell through in 2002 when the property in Mooresville Indiana was foreclosed on. Garfield does make an appearance however at a water ride known as ‘Garfield’s Nightmare’ at Kennywood in West Mifflin, Pennsylvania, so he’s not been entirely ignored in the land of amusement venues. 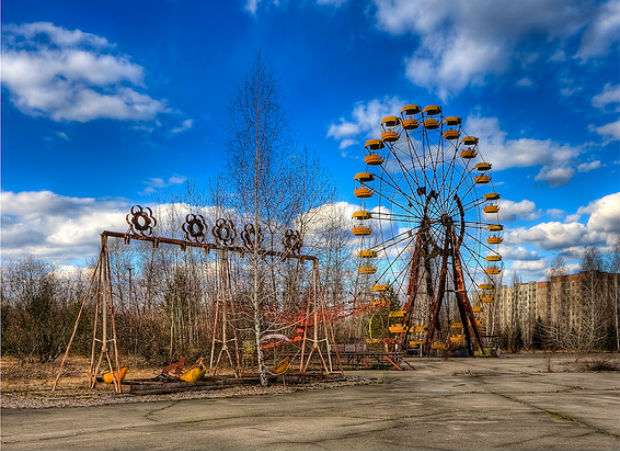 There are few things more creepy than an abandoned theme park. The creaking Ferris wheel, the crawling shadows, the eerie carousel music that won’t stop playing in your head. Also, there is nothing more terrifying than coming face-to-face with a giant clown head when there is no one within 50 yards of you.

Most abandoned parks are at least open to the public for a while before tragedy or financial constraints (or a combination of both) force its closer. Pripyat Park in Ukraine was scheduled to open on May 1 1986, in time for the May Day celebrations. The rides were ready, the inordinately expensive food was ordered while the staff were busy polishing the best forced grin they could muster. Nothing was going to stop this débutante’s ball.  Nothing, that is, except the biggest nuclear power plant disaster in history.  The infamous tragedy occurred on April 26 1986 when an explosion at the Chernobyl Nuclear Power Plant caused massive quantities of radioactive particles to leak into the atmosphere. The surrounding areas were hastily vacated including the nearest city Pripyat, home of the the newly installed theme park.

The city was evacuated and all 49,000 of its residents have never returned. The theme park has remained closed ever since, it’s motionless Ferris wheel a poignant reminder of the tragedy which struck the area. 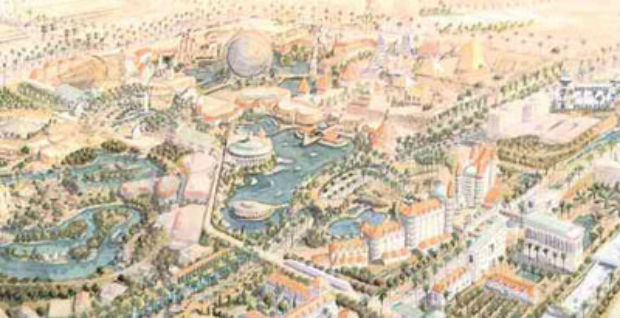 Perhaps the most famous failed theme park of them all (not that the Mouse-house is short on failed theme parks) is the derailed park “imagineered” to be built in California. Tentative plans began in 1989 when designs were drawn up for a $3 billion theme park in California to be built on the car park at Disneyland. Michael Eisner asked his Imagineers (the word engineer is far too utilitarian for Disney) to: “Amaze me”.

Plans took two years to complete and were suitably stunning. Taking Florida’s EPCOT centre as its inspiration, WestCOT was to include a World Showcase centre showing architecture and landmarks from around the world. Unlike EPCOT, these buildings would not have been for show, and  you would actually be able to stay in the themed rooms at the centre of the park.

The property would include more rides than it’s Floridian counterpart, including Disney’s most time-consuming, a 45 minute WestCOT cruise taking guests on a winding trip through the Four Corners of the World on the River of Time. Taking the complaints that EPCOT was light on rides and heavy on education, WestCOT was to get the balance right. The centerpiece 300 foot-high globe sitting on an island lake would have a ride inside. Altogether the theme park would have stretched across 470 acres of land and was to be completed by 1998 at the latest.

Unfortunately, when you wish upon a star, dreams don’t always come true (there’s an important lesson there kids), unless of course, you’re rich or a honey-voiced cricket. Facing protests from locals in the Anaheim area, problems in land acquisition (announcing their plans before they had bought all of the land was probably Disney’s dumbest idea until they gave John Carter the green light) and spiralling costs, WestCOT was eventually scrapped in 1995. While the full park was never completed, bits of the original designs have popped up in other places, most notably in the park that replaced it, the less ambitious park Disney’s California Adventure. If you are looking to book Disney Florida holidays in 2014 then can click that hyper-linked text.

For a more detailed look at how WestCOT might have turned out check out mickeynews.com, which, despite the name is completely safe for work.