Ever thought how great it would be to just ditch work, escape the rest of the world, build your own island somewhere in the Caribbean and live out the rest of your days sipping rum in the sun with the most amazing view imaginable? Well one man, Janti Ramage, has done just that. 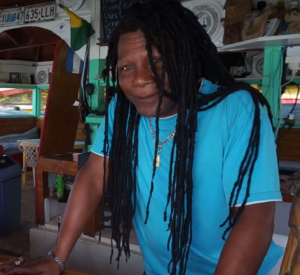 The creator himself, Janti Ramage.

It all started one day when Janti, a local to the Grenadines‘ Union Island, was employed to remove the thousands of empty conch shells which were littering the shores. The task was proving impossible and just when all hope was lost, Janti had a lightbulb moment… why not make an island from them? Of course it sounds totally outrageous and people probably thought Janti had lost his marbles, but after months of hard work he had managed to single-handedly sculpt his very own island made of the spare conch shells and cement. He then built a bar (and his house) on it and named his creation ‘Happy Island’.

It wasn’t long before fishermen, sailors and locals discovered Janti’s bar, and it quickly became a hotspot for anyone in search of a good time. Janti was later gifted a few palm trees from nearby Palm Island, adding the finishing touches to his man-made paradise. Now, over a decade later, the little island beach bar has become famous around the Caribbean and Janti is something of a local legend praised for his ingenious idea and his constantly smiling face behind the bar welcoming each guest. 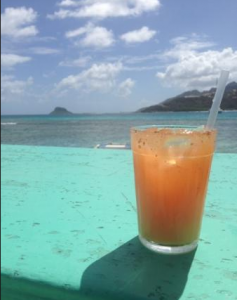 It’s always happy hour on Happy Island! Janti’s speciality spiced rum punch is said to be the best around, and those that stay on the island for dinner can enjoy his delicious barbecued lobster while taking in breathtaking views of the Tobago Cays, Palm Island and Union Island all at once. The little sanctuary even includes two guest rooms, just in case anyone gets a little too happy to make their journey back to the main islands!

To reach this wonderful watering hole, all you need to do is take a short boat ride from one of the nearby islands. Staying at Buccament Bay Resort & Spa on St. Vincent island is a convenient base from which to access Janti’s masterpiece. Buccament Bay Resort & Spa is an all-inclusive beachfront hideaway of rare charm and excellent family-friendly services. Speak to the friendly resort staff about arranging a water taxi to Happy Island, but be sure to call before you set off to make sure there is space at Janti’s Happy bar.